By Ester Aguado - translated by Graciela 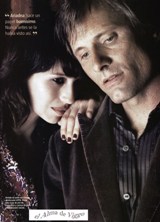 He is so close and natural, so kind, that it is hard to realize you are talking to a superstar. He wears an impossible shirt, dozens of San Lorenzo wristbands, his favorite soccer team - from the time he lived in Argentina, between 2 and 11 years old -; he follows his own tradition of bringing alfajores (a special type of cookie) as a gift for the entire crew, and he wears no shoes ("Why wear them, if I'm not going to leave the hotel?")

Viggo, I see you are very relaxed and pleased, after having had Ariadna Gil as your lover.

VM: (laughing) Those were some of the easiest minutes in my entire career. Seriously, I liked that relationship a lot; it's one of the best things in the movie. Ariadna's role is great; she had never done anything like this before.

Alatriste attracted you because the role was different from what you had done before?

VM: I don't know if I looked at it like that. What I liked the most when Tano (Agustín Díaz Yanes, director) went to see me in Berlin with my friend Ray Loriga was that I could work in Spain. I found him very nice, intelligent and reasonable, and that time in history captivated me.

You prepared very well for the role.

VM: I always research when I accept a role, and I keep learning during the filming. But in this case, I made a bigger effort because I had to improve my accent, eliminate some expressions typical of Buenos Aires (Argentina), and learn to speak the way they did in the Spanish Golden Age. Tano and my friends taught me a lot of bad words (laughs). I also tried to discover the Captain's soul; that's why I went to León, I bought books, visited museums, and enjoyed their wines! And I felt very comfortable in their mountains, where Alatriste must have been born.

Arturo Pérez Reverte told us that you stayed in character when filming was over.

VM: Some actors seem to be in a hurry to get rid of the character they are playing; that is not my case. I don't do it just because I want to look a snob, but because I want to go on investigating and enjoying the new point of view that Alatriste offers me.

Have you found many differences with American movies?

VM: Movie making is very different in all parts of the world. It's true that in Spain you can work in a pretty relaxed atmosphere, and that contributes to people not taking themselves so seriously, and that kind of relationship shows on the screen. We became a travelling circus, like a family of puppeteers (laughing).

What was the best thing you got out of the three months of filming?

VM: The great friends I made, the soccer games, bullfighting, omelettes (Spanish tortilla), wine, and that, little by little, I am getting to know myself better.

EXTRACTS FROM THE INTERVIEW WITH ARIADNA GIL

After Ariadna Gil has talked about herself and her acting career she is asked about working with Viggo.

We are dying of curiosity! How does it feel to be the lover of one of the most desired men on the planet?

AG: Viggo is so sweet, and we managed to create an intense complicity between us. It's been a pleasure.

We understand that but, does he realize how much people admire him?

AG: He is exactly the opposite of what is considered a "superstar". He is aware of the image that he projects, but he doesn't care: he has a very rich personal world.