"I'm more of a survivor than a hero"

By Javier Cortijo - translated by Margarita 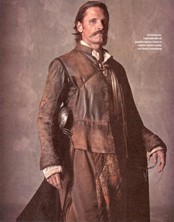 Image CESAR URRUTIA.
© ABC (1st, Sep., 2006). 2006 Picaso Estudios, ….
To paraphrase Bogdanovich, the hero is set free once again. Because lately, deep down, Viggo Mortensen's DNA should be becoming accustomed to this uncomfortable role that he is suddenly playing more and more, repeatedly peeling back layers of obscure characters' skins to reveal his fresh take on their lives and their roles in history.

If he was the best Tolkien hero and the dark, constant hero in A History of Violence, now he's the best hero of the twilit, imperial era that Perez-Reverte never dreamed existed. The actor-photographer-painter-Danish-Argentinean-New Yorker dissects the biggest Spanish production of the century.

What about those Flanders soldiers? It was quite cold wasn't it?

Of course! (he laughs) And it was work that was as gratifying as it was complicated. It wasn't at all easy. I had to learn to get under Alatriste's skin and research Spain's history, even though I knew something about it, having lived in South America and having had a lot of contact with your culture, from Velazquez to Quevedo, and their regions, especially the north, even though we filmed in Andalucia and Madrid.

Physically, you were submerged in copious battle sequences. How did you transform yourself into a mercenary in the court of Felipe IV?

It was useful for me to travel through Leon, where Alatriste was educated, even if it's not shown in the movie. I travelled through Castilla La Vieja (sic) almost as a rite of initiation, and was influenced by the manner of its people, their seriousness, their way of speaking...or of not speaking, since they're very terse.

By the way, when you came to Spain to promote Hidalgo you declared that you were terrified about Alatriste's accent. Did it take a while to get over that fear?

Yes, a long time. It took an enormous amount of effort. In the end, I took it is an important responsibility: I wanted to be just another Spaniard, and I knew I'd achieved that when the actors and crew accepted me as one of them. Without that, everything would have been impossible. I also read all the books I could find about the period, about the soldiers, about Quevedo, history, art...

It's interesting that a person with your resume prior to Aragorn ends up being the prototype for the 'fantastic, historical gentleman.' Do you feel a little like an accidental hero?

A little, yes. It's a strange situation because heroism over the last few centuries can be understood, if the effort is made. Including the fantastical and mythological heroes like Aragorn, who I tried to humanize. But what I like is to portray contemporary heroes, who many times go unperceived.

You've worked on all kinds of films, from My Brother's Gun to GI Jane to The Texas Chainsaw Massacre 3. Have these experiences helped you to adapt to the enormous celebrity status that fell upon you after the Rings trilogy, something which you've had to contend with ever since leaving Middle Earth?

Without a doubt, even though luck is also a factor. Or good fortune, because I don't like violence or war or weapons. I'm very much a pacifist. I'm very interested in history, because it has demonstrated life isn't easy and that you have to give it all that you've got. It's not heroism, it's simply survival, maybe I'm like Alatriste in that way. The most interesting thing is seeing how people react to losing. Knowing how to lose is crucial.

That, and maintaining European roots, as you will be continuing to demonstrate in your next projects, right?

Now I'm going to film another movie with Cronenberg, Eastern Promises, a movie about trafficking women. Then I'll make Good, where I'll play a professor of literature in 1930s Germany who, little by little, starts to accept Nazism in order to save his career. It's a metaphor about what's happening today in countries like the United States: many who never would have voted for Bush but felt obligated to do so and many longtime Republicans now repudiate him. People are unpredictable and voluble. Just like the political powers that be.

For example, the Spanish Empire in Alatriste's time.

Exactly. It went from being the ruler of the world to sinking into abject misery. History always repeats itself. Public health in the United States is almost at the same level that it was at in 17th century Spain. In reality, this movie isn't historical, it's present day actuality.
Top of this page
Last edited: 11 September 2006 05:13:34