The City Council Grants the Province's Gold Medal to Mortensen 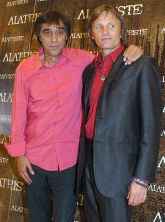 © Terra.es.
Díaz Yanes is now thinking of taking his movie to the Oscars, and he hasn't closed the door on a sequel

Tomorrow, coinciding with the premiere of the movie Alatriste, the city council of León will officially approve the awarding of the gold medal of the province to actor Viggo Mortensen.

The honor will be bestowed in public on a date yet to be agreed upon by the actor and the city council. It's another honor to be added for one who will, in just a few hours time, become an honorary Leonese.

We don't know the actor's reaction to these high honors yet, given the gruelling schedule he is currently undertaking in the days prior to the release of Alatriste, one of the most eagerly awaited movies by both the national and international communities. Nevertheless, knowing Viggo Mortensen's personality and the genuine affection he once again demonstrated for León during last Tuesday's recent press conference, we think he will accept the medal.

The Leonese mountains of the Curueño owes a great debt to this man. From his very first visit to the area, where he followed the footsteps of Alatriste while researching his role, the number of curious visitors from all around the world has grown considerably. Some internet pages, and even travel magazines, have included extensive reports on León and the region.

It's what happened in New Zealand after the filming of The Lord of the Rings. Curueño seems destined to become a new pilgrimage destination for the many fans not only of Arturo Pérez Reverte but, especially, followers of the charismatic actor.

The actor has taken his cues from the mountain region, adopting the mannerisms and speech of locals for the character of Alatriste. Perhaps he has seen in these people a certain pride that Viggo himself spoke of during a press conference last Tuesday, 'He's the one who teaches us to be great but also not to ever take a step backwards, to ask forgiveness or to say I love you.'

Agustín Díaz Yanes, who was in Barcelona yesterday with some of the members of his cast for the screening of Alatriste, explained that just now he can't confirm a sequel to the adventures of the 17th century Spanish soldier, since that really depends on Arturo Pérez Reverte.

Nervous about the imminent release of Alatriste, the most expensive movie in Spanish film history, with a 24 million Euro budget and which will have 450 copies distributed, the director of No Word From God has confirmed that 'the value of this economic adventure for Spanish film will not be wholly ascertainable until several months from now. Let's hope that if the movie does well, it will then serve to encourage future feature films backed by great resources,' he declared.

Díaz Yanes added that in Spain 'people are wealthy but movies are made on a shoestring budget, which doesn't allow them to compete internationally or even amongst Spanish audiences.' On the other hand, he added that the corruption of 17th century Spain couldn't happen in a government that counts José Luis Rodríguez Zapatero as president. At the same time that he made his rounds of the press in Madrid, Mortensen insisted that 'the amount of money and the location don't matter, what's important is the director. Good films have no boundaries,' added the star of A History of Violence, who will work once again with director David Cronenberg when filming Eastern Promises, which will also star Naomi Watts.

Toronto, Rome and the United States will be among the international festivals which screen Alatriste, whose team is now in the middle of touring all across Spain.

Pending the official declaration of the 5 candidate movies which will represent Spain at Hollywood's Oscars, Díaz Yanes has said that it wouldn't matter to him if his film were among those chosen.
Top of this page
Last edited: 4 September 2006 13:49:42