By Pedro Piqueras - transcription by Graciela

Telecinco Interview 8.28.06.
© Telecinco.
T5: Here is Viggo Mortensen, the actor that plays Captain Alatriste. He is visiting our studios...right now he is in make up. This is Informativo Telecinco...here he comes...

T5: Viggo Mortensen is here, obviously without the moustache.

Viggo: Thanks for inviting me to such an important and serious programme. It's a pleasure.

T5: The entire place is in an uproar.

T5: It is said that you also dressed as Alatriste when you were not filming. Did you feel that you lived in the XVII or the XXI century?

Viggo: It is easier to get used to the character and to believe in it if you wear the clothes, the sword, for several days.

T5: You interpreted a character that is the quintessence of the Spaniard. What do you think about them after playing Alatriste?

Viggo: They are all different. It's been a privilege for me. And for the other actors, too. It's an important story. We can see it's creating a lot of expectations. It was entrusted to the director to fulfil the beautiful phrase that the soldier Copons tells Iñigo: 'Tell what we were'. And Tano did it in a great manner and from his heart. 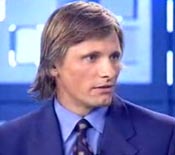 Telecinco Interview 8.28.06.
© Telecinco.
T5: The author of the books, Arturo Perez Reverte, says that he cannot imagine anybody else playing Alatriste...

Viggo: Well, there's no way back. It's already done (laughs).

(They then show a clip of Arturo Pérez-Reverte)

APR: I had seen Viggo in GI Jane, with that son of a bitch face, and I thought, he will be a terrific Alatriste, because that's what Alatriste is, a murderer/killer, a good soldier that lives from his sword and kills for money, but that has other values like loyalty; he has rules, and dignity.

Viggo: It seems that this man is allowed to say whatever he likes on TV (laughs).

Viggo: I think this movie can start a new era for the Spanish and the European movie industry; and all those that have been raised in the Spanish language, like you and I, and also all the people from different Spanish regions, which are so well represented in this movie, will be very proud.

T5: And we wish you luck with the movie. Do you like soccer? Your team lost 1-7 back home. Are you also a fan of Real Madrid?

Viggo: More of San Lorenzo, but a Madrid friend gave me Juanito's shirt, and it somehow touched my heart when he told me the player's story.

Viggo: Well, I admire what he has done...(laughs); in Madrid, I have great hopes for Aguero, who plays in a different team.

Viggo: About San Lorenzo, I'm not mourning. I can take it and we'll move on. I can't say it was our Uclés, but it also wasn't our Lepanto. We are alive...and we go forward.

[The presenter then thanks Viggo for coming and says he would make a good football commentator.]
Top of this page
Last edited: 6 September 2006 09:55:35