A Look of His Own

By Juan Cruz - translated by Paddy 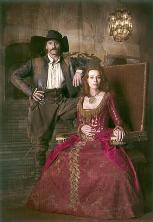 Image César Urrutia.
© Diario EL PAÍS S.L. | Prisacom S.A..
"I'm not Captain Alatriste. The thing is that Alatriste looks (at things) in the same way I do". When he published with Alfaguara the first instalment of The Adventures of Captain Alatriste, now a decade ago, Arturo Pérez-Reverte already had the titles of the next chapters of the saga written on a sheet of paper; for him they were like a duty, a challenge he had planned, and that he was going to fulfil to the letter. The literary gift he owed to his daughter Carlota, to the people of her time. Then the editorial phenomenon arrived. "Four million and a half volumes have been sold, comics have been done, there has been a real alatristemania!, and now it's a film. How was I going to think that the character would be so alive one decade later?" The film arrives after the publication of El pintor de batallas (The painter of battles), his latest novel, in which the war is the canvas where the defeated looks of weary characters are reflected.

Pérez-Reverte put so much passion into the writing of his saga, which he had conceived as a lesson about the Spain of the XVII century, that people used to ask him whether he was Alatriste. The film based on his novels is about to be released, and Pérez-Reverte answered the same to an identical question. "Alatriste is Alatriste, but the look is mine. He's the one I created. And what Agustín Díaz Yanes has done is picked up that look, moving, and sometimes uncomfortable, that Alatriste has about the tragedy of being Spanish."

It's not, he says, "a chauvinistic or national look", but a way of showing the Spanish a fundamental period of the History of Spain, "manipulated by some and contaminated by others; some people wanted to erase it, and others, seeing that they couldn't erase it, or clean it, because it was considered to be dirty, decided to forget it." He faced that history by trying to give Alatriste the content of a modern hero, in which people could see the problems of the present times in perspective; in Spain, he thinks, "we still stab each other in the same cainite way of the XVII century." "He's not an archaic character, an old character; people can see the world through him," said the novelist, and he wanted that mark of modernity to be in the film. When Díaz Yanes showed him his proposed script, the author approved it. He rarely went to the shooting; eight of his novels have been or will be material for the cinema, and he already knows that "it's better that the director can do his work, with no other interferences than the ones he wants." So he merely approved the script and the cast, at the head of which is Viggo Mortensen, who has captivated him. "He is Alatriste, the one I thought, the one I wrote! He's almost the one from the drawings!"

"I liked the film a lot, and it is going to fascinate people. It's what an author wants when he creates a character: that afterwards the films re-create him and respect him. Agustín Díaz Yanes has done this country an important favour, helping to understand and see a part of the history that has often been forgotten, contaminated and dirty. He could have done a film just about adventures and stabbings. But above all he wanted to respect the dark side of that time, the solitude, the poverty, the abandonment that a Spaniard and a soldier lived in. He has made that climate be the main element of the film. And Viggo is that Alatriste who lives in a growing solitude, a weary hero against some fanatics and some imbeciles. The face of that Alatriste, loyal soldier, with his decency crushed by the powerful, the good vassal who didn't have a good lord, is the one that Viggo transmits. It's like he had always been Alatriste! And the truth is that I think that Alatriste has made Viggo a Spaniard." At the first screening of the film "it was moving to see how the actors responded to the emotion that their own work emanates. Seeing them crying with emotion must probably be satisfactory for Agustín; but just imagine for me, the one who created those characters they bring to life in such an extraordinary way. And for Antonio Cardenal, the producer, the one who really insisted on having this film done."
Top of this page
Last edited: 16 August 2006 04:31:38