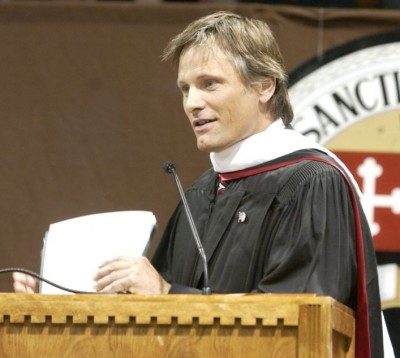 St. Lawrence University Commencement & Honorary ….
© 2006 Newswise.
Thank you for including me in the distinguished company of this year's other honorary degree recipients, Barb Tewksbury, Dick Gilbert and Frank Piskor. It is a particular privilege to address my soon-to-be fellow St. Lawrence graduates and their families. Congratulations to you all. A special salute goes to those of you who, like me, came from North Country high schools.

My parents are also here today, and I'd like to offer them an overdue public apology. Twenty-six years ago, I ended up being the lone graduating senior not wearing the cap and gown, much to my mother's dismay. To make a long and not very exciting story reasonably short: My motive for doing this was because, like some of my classmates, I was concerned about what we felt were unfair labor practices by the manufacturer of our caps and gowns. Consequently, several among us decided to make a silent show of protest by wearing white armbands in lieu of our caps and gowns. I'm sure that others understandably chose not to go through with this symbolic gesture because they wished to avoid the risk of offending or disrespecting their families and this university. Our president and today's posthumous honoree, the late Dr. Frank Piskor, as well as our commencement speaker, the late Senator (Daniel Patrick) Moynihan of New York, seemed only mildly puzzled by my brief, inexplicably unrobed appearance onstage. I'm sure the senator had no idea why I removed my white armband and handed it to him as I collected my diploma. Probably he thought it was some kind of fraternity prank.

While I regret any embarrassment I may have caused my family - and although I did feel a bit foolish when I realized I was alone in showing up without cap and gown - I do not regret the gesture or the sentiment behind it. I don't in any way question those whose common sense kept them from joining me that day, and I am not claiming any moral high ground. What I'm trying to say, in a roundabout way, is that activism is not a dirty word. Much has changed in this country and the world since 1980, but the value of active citizenship is greater than ever. Making an earnest attempt to connect with people and issues outside of one's own limited personal circle will always be worthwhile. My liberal arts education at St. Lawrence taught me as much, and for that I am grateful. Perhaps the most important lesson I received at this university was to try and remember that, to quote Thomas Paine, "my country is the world, and my religion is to do good." Perhaps some parents in the audience, considering the high cost of tuition, might feel that this sort of education is pretty damned expensive. I believe, however, that the lack of just such education can prove to be a lot more expensive for society in the long run.

When calculatedly dishonest and self-serving behavior is increasingly becoming the norm from many of those holding high political positions in the United States, it is thoughtful individuals such as you, the members of the Class of 2006, who can help mend the frayed moral fabric of the nation by your personal example. Whether you see yourselves as so-called "liberals," "conservatives" or some other political persuasion - or none at all - you now, by virtue of your liberal arts education, ought to be qualified to ask intelligent questions and not be intimidated or stifled by unreasoned argument, no matter how forcefully it is presented. This, of course, goes for you non-U.S. citizen graduates as well. I'm certainly not asking anyone to run out and burn down City Hall, or to necessarily engage in any overt protest. I simply advocate your continuing to explore being involved citizens. Don't ever be afraid to ask the question, "why?," or as most small children do, to repeat that question as many times as you receive an unsatisfactory answer. Inquiring minds are essential to a healthy society, and to making an individual art out of living. With apologies to any Latin scholars for my pronunciation, I offer the following epigram:

For non-Latin scholars, that translates as: "Fate leads those who are willing. The unwilling it drags." Or, if you prefer your words of warning from a Greek, Plato once said that "One of the penalties of refusing to participate in politics is that you end up being governed by your inferiors." Recent election results and subsequent political appointments in this country seem to bear that admonishment out.

Since I'm making such a point of promoting socio-political engagement - as Professors Wells and Hinchman, among others, taught me to do here at St. Lawrence - what specific issue can I leave you to consider? In honor of my maternal grandfather, the respected ophthalmologist Dr. Walter S. Atkinson, who received an honorary degree from St. Lawrence in 1958 - the year I was born - I ask you to reflect on the sorry state of this country's health care system.

According to the journal Health Affairs, the U.S. spent two and a half times more per capita on health care for its citizens than the average industrialized country did in 2003, and it lagged at least a dozen years behind all other industrialized countries in adopting electronic health records. Just last week, a study in the journal of the American Medical Association reported that, although our per-person health care cost is nearly double that of England, Americans, regardless of income, have more diabetes, heart disease, respiratory problems and many other diseases than do the English.*

The fact that millions of Americans cannot afford health care insurance and therefore do not seek regular necessary medical attention surely is partly to blame. If you try to save money in the short term by not regularly servicing your car, you will find that it won't function very well in the long term, and that you will incur great expense trying to fix the situation. The same goes for your body. Lack of political will and leadership is the reason our health care system has not evolved and kept apace of those other industrialized countries - not logistics, as many politicians and health care industry lobbyists would have you believe. A recent Washington Post/ABC News poll found that 80 percent of Americans regard universal health care as more important than holding down taxes. You don't hear this reflected much in political discourse on Capitol Hill or by the health care industry. Enormous profits go to drug companies, private medical administration businesses and insurance companies in the U.S.A., from overpriced drugs, superfluous bureaucracy and other inefficiencies.*

Among the most revered of teachings in any religion or spiritual code of ethics, including those attributed to Jesus Christ, is the admonition to care for the least fortunate among us. This lesson seems to have gone unheeded by any in the health care and insurance business, and, most tellingly, by the politicians who do their often uncharitable and obstructionist bidding. This is especially galling in light of how many of these same politicians regularly trumpet their avowed Christian values as badges of honor and electibility.

Doctors like my cousin, Margot Remington of Watertown, New York, are constantly put in awkward positions by this state of affairs. They cannot be expected, through occasional acts of charity to patients who cannot afford needed care, and in spite of suffocating amounts of unnecessary paperwork, to make up for the serious shortcomings of our antiquated and, for most Americans, prohibitively expensive health care system.

People cannot be mentally focused, positive and actively engaged citizens if they are constantly worried that the only thing keeping them from financial ruin is to dangerously delay seeking or altogether deny themselves and their dependents necessary medical attention. You can, if you will, as informed individuals, do something - however little - to call attention to this most important problem in your own communities. I hope you will somehow get involved in this issue, because it's one that sooner or later affects us all. As the poet W.H. Auden put it:

'There is no such thing as the State
And no one exists alone;
Hunger allows no choice
To the citizen or the police;
We must love one another or die.'

Here's wishing you all a shining summer, and exemplary lives as citizens of the world. Go get "em.