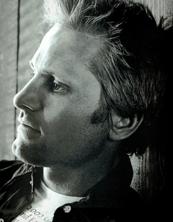 Image Michael Thompson.
© Premiere 2005.
Viggo Mortensen looks like he's been around the block a few times. The lines in his face, the craggy smile, and the often pensive look in his eyes reveal a man with a past that has strayed beyond the cushy confines of movie sets and press junket hotels. 'Viggo has credibility as a human being, which seems to be rare these days,' director David Cronenberg says of his lead actor in A History of Violence. 'I wanted a guy who you can't take your eyes off, but who also has that character-actor thing, which means he can be real.'

Audiences believing in Mortensen's turn as Tom Stall, the upstanding Midwestern father and husband, is essential for A History of Violence to work. Without that, the film's secret - that Stall is actually a gangster with a hidden past - would fall flat. Conveniently, withholding comes naturally for the actor. 'I never have played a part where I didn't have a secret. It doesn't matter how simple it is on the page; if you are playing a noble, heroic character, then when is that person not brave?' Mortensen says. 'To be an actor playing a character with a secret is like a gift.'

With a second role (after 2004's Hidalgo) under his belt since that little hobbit trilogy, Mortensen is thrilled that people are responding more to the story of Violence, rather than to his connection to the blockbuster. 'People on the street [approach me], usually talking about how the movie has touched them personally,' he says. 'They're not talking about Lord of the Rings.'

But as one who prefers to focus attention on the material or his directors rather than on himself, Mortensen may be entering uncomfortable territory as awards season approaches. 'Viggo said, "I would much rather David get a nomination than me''' Cronenberg says of the Oscars. 'And I know he meant that for many reasons.'
Top of this page
Last edited: 12 February 2006 12:37:03