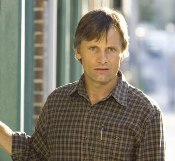 Image Takashi Seida.
© New Line Productions Inc.
If you pay careful attention to David Cronenberg's superb new drama A History of Violence, you'll notice a fish motif in scenes involving Viggo Mortensen. This, however, isn't the infamously quirky Cronenberg adding a personal touch, but the work of the mercurial actor himself. In fact, Mortensen appears in front of the press sporting a t-shirt with a nicely rendered fish on it that has been signed by the entire cast.

"It's things that came out of discussion or exploration or inventing a life for this person, but I do that with every movie," he says. "For some movies, it might be pieces of writing that I find and paste on the wall of my dressing room or hotel. Little reminders ... that I can refer to as I'm going along."

Whatever their purpose, it clearly worked. Mortensen gives one of the finest performances in his career as Tom Stall, a seemingly quiet family man in Indiana whose life is thrown into question by an altercation in his small-town diner. The veteran actor, best known for his role in The Lord of the Rings, offers a very subtle, startling and disturbing transformation. Mortensen credits a lot of his performance to Cronenberg, saying, "It was a character that the director allowed me to play in the most complex way. It's probably as satisfying, or more satisfying, than anything I've played before, but it's because I was working for someone who appreciated it."

Beyond the twist and turns of the plot, one scene moviegoers will be talking about long afterwards is a stairway sex scene between Mortensen and his on-screen wife Maria Bello. The sequence almost defies description. It's seemingly passionate, violent, kinky, ludicrous and disturbing all at the same time (which is right up Cronenberg's alley). According to Mortensen, the scene works "because [Bello] didn't play it safe and was willing, as difficult as it was, to go for it, to risk making a fool of herself, and I was also willing to make a fool of myself, and David Cronenberg was more than happy to see us make fools of ourselves."

The director also achieves tension in the scene by extending it longer than the audience (and the actors) expect.

"You're sort of waiting once it gets into a certain area to hear 'Cut.' That's sort of your safety net. There was nothing," Mortensen says. "That was something he intentionally did. He looked at the cinematographer like, 'How much film do we have?' And the cinematographer whispers, 'Plenty.'" (Laughs.)
Top of this page
Last edited: 23 November 2005 06:12:54