Image Charlotte Gillard
Venice Beach might have been Coney Island, with Frank T Rios' classic New York drawl drifting like jazz notes through an oblivious crowd. The fairly intimate gathering of agog bystanders, hardcore poet fans and press bugs huddled in the chilly pre-rain afternoon like a small raft in the storm to celebrate the new Poet's Walk on the boardwalk last Saturday.

Wanda Coleman read a poem for "Greenie", Beyond Baroque's notorious wordster, "What To Do About Billy Holiday." Reading from a book she'd borrowed from Small World Books just minutes before, she explained she'd forgotten to bring her own work. She read in tribute to Venice Mentors. Spoke of 1968, people she learned from at Beyond Baroque, including John Thomas, Venice West original beat also being honored this day. She spoke of heroes from Beyond Baroque's past, Bob Flanagan, Jim Krusoe. Ellyn Maybe sprang forth, a bright shining baby daisy blooming on a grey dawn. Cheerfully read her brilliant and humorous self-analysis. Linda Albertano shouted of the Pacific! Viggo Mortensen, local actor/poet (who has contributed greatly to Beyond Baroque's staying afloat in hard times) read his blurb that walked behind him in the concrete. In easy to read, straight up and down font, even Jim Morrison has a place. A modern day Olympus for Venusions. Venice's finest. Majid Naficy read first in the soft rhythm of his native tongue, then a translation. 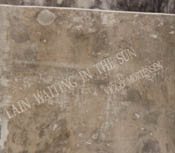 Image Charlotte Gillard
Philomene Long and John Thomas have lived here for decades, keeping fires burning from days of '50s and happenings, beatnik bongo hepcat beach parties. The smoke of jazz, cigarettes, coffee, and tea, would flow throughout the boardwalk, as my dad, the "50s leather jacket beatnik drummer" tells it of those days when Venice was Los Angeles' Beat Capitol.

Now more monument to tourism than funky beat hang, Venice could be Coney Island. Frank Ruiz brings us back to '50s pre-Fonzie days, and Jazzcats celebrating rebellion, not conformity. Then Jim Morrison stumbles upon his own soul kitchen. So it is, that this day marks the first day, according to BB's ever stalwart Fred Dewey, that Morrison is "recognized as a resident of Venice and a writer." Exene Cervenka of LA's original punk band X, whose words are also engraved into the stone, is a no show.

Tony Scibella read quick words, saying, in his frank, easy style, "Someday, I will be known as the world's oldest beatnik."

Frank Rios spoke of Tony Scibella, transporting us from that chilly shmancy new pavilion dedication, through rhythm, accent and phrasing, and we could almost hear the finger snaps. Even in the cold, we could be anywhere, Coney Island, a Greenwich Village coffee house circa 1950s, or even at the Venice West Cafe in the height of the beat days. There may have been breakdancers a few feet away, and girls in bikinis skating, but within the little gathering, people were rapt. Bike riders stopped to gawk at the listening crowd, as these curious and eclectic poet folk shouted words about Venice, other poets, other times.

John Thomas told of ghosts in halls of he and Philomene's Venice apartment. He spoke of the writer ghost, "so sweet and joyous is the tiny sound of writing poems." He stood, all authority, character. Shakespeare. Holding court within the small group of poets, some clutching at their scarves and sweaters in the cold. Philomene Long, resident Beat teacher and Venice legend ranted on developers who rape Venice's soul, but she did admit she liked what they had done to Venice this time.
Top of this page
Last edited: 23 June 2006 14:49:40