Viggo Mortensen, Peter Jackson and Elijah Wood were guests on the PBS talk show, Charlie Rose, on December 3, 2002, to discuss their upcoming movie The Lord of the Rings: The Two Towers. Viggo wore a t-shirt emblazoned with 'No More Blood For Oil' which provoked the following dialogue on current events.

Charlie Rose: You're obviously making a political statement with your t-shirt.

Viggo Mortensen: I wouldn't normally, but it's sort of a reaction to... I've heard a lot of people say to me and I've read in a lot of places about the first movie, and increasingly about the second one... I've seen where people try to relate it to the current situation - specifically the United States and their role in the world right now. And I - if you're going to compare them, then you should get it right - I don't like hearing... I mean I play the character who's defending Helms Deep and I don't think that The Two Towers or Tolkien's writing or Peter's work or our work has anything to do with the United States' foreign ventures at this time. And it upsets me to hear that in a way. And it upsets me even more that questioning what's going on right now, what the United States is doing, is considered treasonous really: 'How dare you say that? How un-American of you.' And really, this country is founded on the principle that if the government isn't serving the people you at least have the right to say, 'Wait a minute. What's going on?' And there're no questions really being asked, at large, about what we're doing. Whereas in The Two Towers you have different races, nations, cultures coming together and examining their conscience and unifying against a very real and terrifying enemy. What the United States has been doing for the past year is bombing innocent civilians without having come anywhere close to catching Osama bin Laden or any presumed enemy, and, as a distraction, we're now - apparently it's a given - we're hell bent on increasing the bombing that's been going on for the past eleven years in Iraq. And I don't think that the civilians on the ground in those countries look at us in the way that maybe Europeans did at the end of World War II, waving flags in the streets, I think that they see the US government as Saruman.

Elijah Wood: As a threat.

VM: Yeah, as a threat. And they're terrified - and have been for a long time - and we are not the good guys, unfortunately, in this case, and...

CR: Even though right after 9/11 there was an extraordinary amount of public support for the United States to do something.

VM: I'm supportive of the United States. I'm an American. And I have nothing against patriotism. But if one is going to compare then the comparison is quite the opposite of what is being made.

CR: Let me just make sure of the comparison. Because I asked you about the t-shirt at the beginning and you said you made it yourself.

CR: The idea... you object to the comparison of this film with respect to American involvement with Iraq or -

CR: - with the Afghanistan war or the war against terrorism - in comparison with the film because of your opposition to American policy.

CR: We're the bad guys because we responded to -

VM: You know, the people who are terrified at Helms Deep, who are outnumbered in this incredible violence and desire to control - to destroy - the people of Rohan and the rest of the free peoples of Middle-earth, and to control their wills, to control their infrastructure - or destroy it - that's what we're doing in these countries. That's really what we're doing unfortunately. I'm not saying to anyone, to you, or to you, or to you: 'This is what you should believe.' I'm just saying, why not ask the question: 'Why are we doing this?'

VM: And I don't like the comparison - and I keep hearing it, so I felt like saying something about it. You know, I'm not really a fan of the saying, 'My country right or wrong' - well, that's an incomplete quote too, the rest of it is more reasonable - I'm more of a fan of saying let's make an honest effort to get it right. I think the rest of the quote is if we're getting it right let's keep trying to do so and if we're getting it wrong, let's try to get it right. I think he said something like that.

CR: I want to turn from this, but let me just stay with the idea for a second though. What would you have had the United States do after the attack at the Pentagon and at the twin towers? 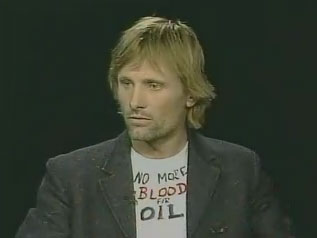 VM: I would not have continually bombed innocent civilians from 30,000 feet with no possibility of being accurate and maiming and killing and destroying the lives of many more people than died at the World Trade Center. What does that do? Does bombing people make us safer? Does bombing people make us more loved or appreciated overseas? Will this be forgotten? 'Oh well, it was just a little mistake.'

CR: Would they have been able to stop Al Qaeda and you wouldn't have had... if there is the connection which many people think it is... in terms of the attacks in Kenya, for example? Or other acts of terrorism against the United States and other countries?

CR: Somehow by responding, you can say... because most people believe that if in fact you don't respond you're inviting more terrorism.

VM: There's nothing wrong with responding. It's how do you respond. The fact that if one even questions the way that we responded, that that's considered some kind of fifth column thinking, that it's treasonous, and that those attacks are used as an excuse to limit civil liberties in this country, and that we are coercing other countries whose populations... England, for example. I saw a poll where 70 per cent of English people say they are more afraid of George Bush than they are of Osama bin Laden and Saddam Hussein. Because we are... our government is incredibly violent and aggressive and rapacious. And we want to control those regions. It's beyond a response. And there are other ways, I would think, of responding. We've done this before in our history. Even World War II. Was it necessary to kill so many civilians in Dresden and places like that? Was it necessary to do things that way? It's hindsight and so forth. But here we are now. We've been doing this for a year in Afghanistan; we've been doing it for eleven years in Iraq. Can we not think about this? You know, I read in the New York Times - which you have here, I looked at it yesterday - the front page is, it's not even, 'should we do this?' or is it a question. It's just the countdown - as if it was a holiday countdown - for the big war and this and that. And then the Science or whatever section... it's bigger weapons and faster vehicles for the military. And then photographs of the women serving. It's all kind of fun. And it's like the people on the ground in those countries, who are the ones who are being affected, they're invisible. If they're not American, if they're not European, they don't exist, they're disposable. And more of them have died in the past year than died at the World Trade Center. What... does that mean anything? And now just because we focused on Iraq for many reasons, not the least of which is oil...

CR: But not only oil.

VM: And some kind of vendetta that our President's father has... Who knows what the reasons are? It doesn't really matter.

CR: But I was going to suggest those two - and I know we want to just get on.

CR: And I think I have some sort of respect for you for the candor and the forthrightness - I know I do - of your views, and invite you back to this program. Because we talk about Iraq a lot here

CR: Before I turn back -

VM: Just to dialogue about it. That's all. I mean if somebody wants to compare our movie - which is just a movie -

EW: People say it's a pro-war movie too which I also have a problem with.

CR: Elijah, do you essentially agree with what Viggo said?

EW: I agree with questioning. Absolutely. I agree with asking questions, which I don't know if people do enough. In that kind of honest way.

CR: Let me... interesting things... you make some of these political points - the president's supporters would want me to contest each one and there's no time for me... Or if you were making an opposite political statement in support of the president, then the people from the other side would want me to contest it and we can't do all that now.
Top of this page
Last edited: 17 August 2005 09:59:07