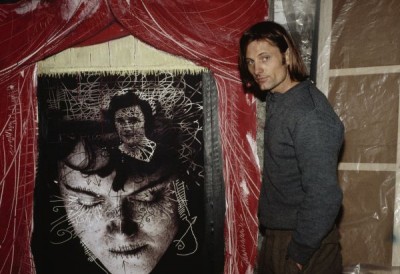 Written words, printed words, often drowned in paint, fragments of paper, images, photographs, the shape of a tree, scratched on to the canvas... The idea of layers, of juxtapositions, of the passing of time, is the first thing that strikes you looking at these big, colourful Viggo Mortensen paintings. Some years ago, in the preface of a catalog, Recent Forgeries, Dennis Hopper had defined that art as 'active, free, yet weighted in tradition, as new as the computer, as old as Christ.' For Mortensen the canvases are like 'a diary, a representation of my memory, of the way my mind works. They reflect precise experiences and moments, even if I don't necessarily remember them.'

We reached him at Track 16, the gallery that until March 30th will host his most recent show of paintings. In a way, it is not surprising that the actor that was Aragorn (the human hero in Lord of the Rings, and one of the most mysterious of Tolkien's characters) has a second, artistic life beyond Hollywood. Maybe there is something elusive, even a little bit reserved, that is present in all of his interpretations (A Perfect Murder, A Walk On The Moon). Maybe it is the fact that, even if his talent is appreciated, he doesn't seem to be stressed about his career or maybe more simply it's his unusual biography (of Danish origin, he was born in New York but grew up in South America.)

'With movies the results, even if they are good, do not belong to me; what emerges is the character as seen by the director. I have no control and as a matter of fact I have no real connection with any of my movies,' Mortensen explains. 'The only thing you can do is to move away from it with a certain grace and the most decorum possible. Even Aragorn is Peter Jackson's Aragorn, it has nothing to do with me. And I don't mean to sound critical; I was only a tone of blue in a bigger painting. If it hadn't been for the role in A Perfect Murder I would have never painted seriously. I used to make some sketches every once in a while, nothing more. But when they allowed me to create paintings for my character (the man that Michael Douglas hires to kill his wife) I discovered how much I liked it. Before the shoot started I had already painted around forty. They used to come much quicker then. Now the process is a bit longer. The paintings have multiple layers. They hold more things, more sensations, images, happenings.'

Like his paintings, Mortensen's photographs also show the subtle intimacy of a diary. Be it those of his son Henry (who is fourteen and acts) or of Elijah Wood on the set of Lord of the Rings, of a trail on the beach, of a deep forest seen from above or the more 'precious' slides in black and white, his are pure subjective images, made to capture the moment: 'It's not so much about what attracts your attention but the mood in which you are in that makes you notice that particular change of light, that movement - what makes you record it so that you can find it later,' says Viggo, who for a few years has always tried to have his camera with him (often the old Hasselblad of twenty years ago): 'With the passing of time, it has become a travel companion. Sometimes I don't used it for days, until something moves me.' In the preface of Signlanguage, the catalog of Mortensen's current exhibition, the critic Kevin Power puts in relation the actor/artist with the poets and painters of the Beat Generation, but he shies away saying: 'I have read those poets and I know that period of the American culture, but I don't pretend to know enough to judge. I don't have a deep knowledge, I stumble into things as they present themselves.'

He almost laughs when I ask if it is true that he is a musician: 'I like to play with music. But I would not define myself as a musician, but as a sound modulator. I love to be with musicians and play, to see what comes out from the mess that we do together. The important thing is to produce sounds, not the instrument. We use what's available, even the exhaust pipe of a car will do.' At the moment he has three CDs on his resume. The Other Parade, which he did in 1998 (and which features his ex-wife the punk musician Exene Cervenka on guitar) reaches me the morning after by courier. On the phone, Mortensen had defined it as 'amusing, irritating, with lyrical moments.' I can't help asking him, with all of these interests, if would crush him to be forced to quit acting. He doesn't even think about it that much before he concludes: 'Actually...no.'