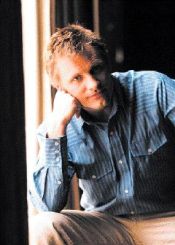 The king is fidgety.

In an elegant, dimly lit ballroom in Dallas' Adolphus Hotel, the light from a single heavily draped window illuminates Viggo Mortensen, star of multi-Oscar-winning The Lord of the Rings: The Return of the King and the newly released Hidalgo.

But he seems more interested in chatting about his book of photographs, a sumptuous collection called The Horse Is Good, than sitting and posing for them. The handsome, soft-spoken Mortensen may have perceived acting as more of a hobby at one point in his life, but after a career spent toiling in supporting roles, his turn in the Rings trilogy has transformed him into an international superstar - and, more important, a leading man.

In Hidalgo, Mortensen plays real-life cowboy legend Frank T. Hopkins, a half-American-Indian endurance racer who - along with his faithful mustang, Hidalgo - were the first American and non-Arabian horse to enter the 3,000-mile Ocean of Fire race across the Arabian desert.

That Mortensen was already an experienced horseman - not including his extended stint in the saddle while filming Rings in New Zealand - adds authenticity to the physically demanding role. It might also help that he becomes so attached to his four-legged co-stars that he has taken home his last three rides - two from Rings and now the spunky little paint named T.J. that's better known as Hidalgo.

'He was just a fascinating individual and I wanted to stay in touch with him,' Mortensen says.

Here are a few more words straight from the horseman's mouth:

How challenging was it to share so much screen time with a co-star who might not take direction as well as, say, a computer-animated Balrog?

We often joked, 'The movie's not called Frank Hopkins, it's called Hidalgo.' So Hidalgo better be somebody, and he is in this story. And it's not animatronics, it's not Mr. Ed... He was going to do what he was going to do. Some of those times where the horse seems to be possessive, or annoyed or jealous or affectionate or encouraging toward my character, where he sort of works as a conscience for Frank...that's stuff that the horse did. That was lucky.

You made some pretty radical climate shifts during the filming, from midwinter South Dakota to the sand-blown heat of the Sahara Desert, and all while sitting on top of a whole lot of unpredictable horseflesh. Was the shooting of Hidalgo as gruelling as it looks?

I wasn't suffering as much as an endurance rider is going to. But you're in the saddle a lot of days, all day long. And you've got your hat and that's about it. And there's dust storms and the elements and just the tiredness, but it's also really interesting. As far as horses go, not only are all horses different, but the same horse is going to be different every day. The things that I assume the horse would do or be up for, he might not be tomorrow, or the horse constantly came up with things on his own.

I've always liked to [ride], and it sort of reminds me of when I was a little boy. When you're a kid, you're kind of fearless. You can get afraid of things, but you're not as conscious of your mortality or of getting hurt as when you're an older guy and you're kind of like, 'Well, you know, if I come off goin' full tilt...this is gonna hurt.'

There's a part of the body that we weren't aware of called the 'nacho'. In other words, it's sort of right in the middle, it's not your, uh, you know, up front and it's not your...and that got pretty sore. We got a nacho pad, but it was a little too late.

OK, 11 [Oscar] nominations for Return of the King, but not one for acting. Were you at all disappointed at the overlooking of you or your co-stars?

It doesn't help me do a better job. I don't connect it to my job at all. Now, some people choose their roles and perform their roles with [an Oscar] in mind, thinking maybe they can get one. And I'm not puttin' that down. It's just not my thing. The reward is not only in the doing, but a secondary reward has clearly been the public reaction, that these stories and these performances have struck a chord.

You mentioned not having watched the Academy Awards in several years [he was also absent at the awards when Rings took home all 11 Oscars last weekend]. Do you think a sweep will mean anything in the long run?

You watch [the Oscars] and you realize that good work is maybe rewarded half the time and the other half of the time it's sort of a crapshoot, a popularity contest, and it's become more so. It's not gonna change my opinion about it having been a job well done, a good effort, and that's gonna last.