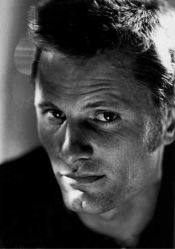 Thirty-six-year-old Viggo Mortensen wants to give away so little about his true self that he leaves the greasy spoon of his choice to go outside and blow his nose. Why should he talk about his personal life, he wonders, when he gives so much of himself as an actor? Whether he's playing the crazy and violent brother in Sean Penn's The Indian Runner or Al Pacino's wheelchair-bound snitch of an ex-friend in Carlito's Way or, most recently, the decent weapons officer with his finger on the button in the nuclear thriller Crimson Tide, Mortensen does not hold back. What he does tend to avoid are details beyond that he was born in New York City to a Danish father and an American mother and moved around for much of his life after that. While making the low-budget Salvation!, he met his now ex-wife, Exene Cervenka, lead singer of the 80's punk band X, with whom he would later move to New York City and have a son. Somewhere in there, Mortensen sold popcorn at an art house, got held up twice at gun point and began a long, albeit patchy, film career by playing Alexander Godunov's brother in 1985's Witness. Despite his reticence, though, Mortensen is not a stingy man. Have one conversation with this wiry, soft-spoken James Dean-ish actor, and afterward he'll fax you some poems - good ones - from his book of verse, Ten Last Night. He'll sit with you on a curb and rub his face with his hands out of frustration over wanting to say more but thinking it's not pertinent. 'I like Robert De Niro,' Mortensen says. 'When he talks about something, it's pertinent. I respect that. I mean, I already feel like I said too much.'
Top of this page
Last edited: 20 December 2005 04:48:19
© Michael Tighe.