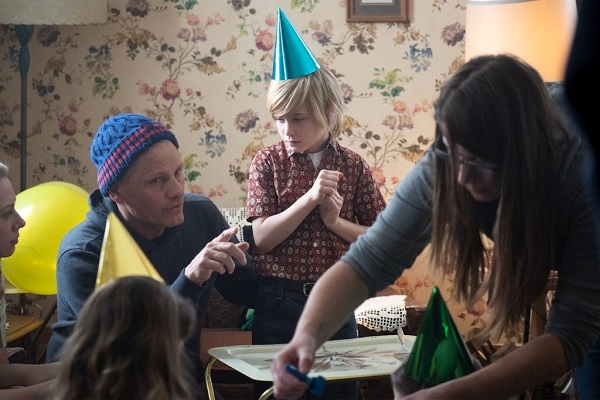 © Hanway Films/Perceval Pictures.
Viggo Mortensen is returning to the Sundance Film Festival for the first time since 2016 when Captain Fantastic made a big splash and led eventually to a Best Actor Oscar nomination for the star. This time however he is adding director and screenwriter to his resume, with his behind the camera debut, Falling, which is set to officially close the festival and is part of the Premieres section but will start screening on Friday. I was invited to see it ahead of time a few weeks ago at a UTA screening and a few days later sat down in a Santa Monica restaurant to talk about the film with its director and co-star.

Falling is produced by Daniel Bekerman (The Witch, Percy) of Scythia Films and Chris Curling (The Bookshop, The Last Station) of Zephyr Films together with Mortensen, who previously produced Everyone Has a Plan, Far from Men and Jauja through Perceval Pictures. Executive producers are Peter Touche and Stephen Dailey for Ingenious Media, Danielle Virtue and Brian Hayes Currie for Falling, LLC and Norman Merry for Lip Sync Productions.

Mortensen is of course best known as an actor who has won three Oscars nominations for films that also include Eastern Promises, and last year's Best Picture winner Green Book. Of course his on-screen work contains such memorable and varied credits as the Lord of the Rings trilogy, A History of Violence, A Walk on the Moon, Hidalgo, and Appaloosa among many others, but the 61-year-old actor has never gotten to fulfill an ambition to direct until now. He has written four screenplays that for various reasons never made it to production, but it was this one which he conceived during a plane ride following his mother's funeral. As he jotted down memories it evolved into not just thinking about his mother, but then his father. Eventually it became more invention than his own life story, and he managed to complete a first draft in a swift two weeks that has brought him again to Sundance, not just as an actor but finally a filmmaker as writer/director. The result was well worth the wait and the subject matter of a son's relationship with a father edging into dementia is a story that will likely hit close to home to many viewers in emotional and surprising ways. Mortensen says that even though his father, mother, grandparents and uncle all suffered from dementia, and that the film is dedicated to his two other brothers, this is not an autobiographical story but one that sprung out of many places and it just suddenly all came to him, like a dream, on that plane. It finally became a story of a fictional family that shares traits of his own.

"A few days after I got home I said I'm just going to look at this thing because I ended up writing a short story sort of. On the plane I couldn't sleep so I just kept writing and then it just became something that had nothing to do with my family but this story. I read it. You know how sometimes if you wake up in the middle of the night and you write an idea down and you think that was great and in the morning you look at it and go it's silly. You record it or you write it. What was I thinking? I shouldn't drink," he laughed. "Then I read that and actually it was the story and I thought that's pretty interesting. I said maybe it's a book or something or short novel. Then the way it's structured with flashbacks and scenes, which was basically in the story, it was very visual. I mean I can picture it. If I can picture it, maybe it's a movie. I was working on this other one. Sort of procrastinating and getting back to the other one, I was in a sort of limbo waiting for somebody to say if they were going to put up money. So I started writing and I wrote it much quicker than any of the other scripts. It was only a couple weeks and there it was."

He kept working on it, rewriting, structuring the complex storytelling in the film that plays with memory in interesting ways, and finally he decided to just start shooting and found the rest of the financing as they went along. Even though there was a limited time to shoot it, he prepared well ahead of time and worked really hard on the casting. When festivalgoers, buyers, and critics see the richly drawn and devastating human drama that emerged they will also know he hit pay dirt with his star, Lance Henriksen, the 79 year old character actor known for movies like Aliens and The Terminator who gets the role of a lifetime as Willis, the difficult father, with increasing short-term memory problems, while still living on the rural farm where his family grew up including son John (Mortensen) who now lives in Southern California with his partner Eric (Terry Chen). When John brings his father out to stay with them while he and his sister (Laura Linney) try to figure out where he might retire, Willis's increasing agitation, both extremely caustic and startling, brings decades-old wounds and divisions between father and son boiling over to the surface. The script is non-linear and contains many flashbacks. Mortensen set the film in 2008, right around the time of Obama's election, another divisive point between the pair. Henriksen, despite his long career, is a revelation in a role that with any bit of luck could put him in next year's awards conversations. Of course the film has to find the right distribution and that is what Mortensen is hoping to find out of Sundance. The cast also includes Sverrir Gudnason and Hannah Gross.

He knew Henriksen from working with him in Appaloosa, the film directed by actor Ed Harris. "I just got to know him a little bit. I just felt he was right, somehow, even though he hadn't done anything like this. Then people said it'll be a lot easier for you to raise the money if you could get a name, somebody who's more known or something. I said, no, he's the right guy. When people said to me why do you want him I said because I think that he is going to become special and it'll allow people to sort of recognize his face. He's done like 250 movies I think. They'll rediscover him. Those who don't know him, they'll be like, 'Who's that?'" he said.

The role is a difficult one to pull off and Mortensen's character has the patience of a saint until one extraordinary scene where he finally loses it completely, something any grown child of a parent who is beginning to fail will recognize. Some backers worried that the guy is too much of an asshole from start to finish, that he's relentless. "I said I think it's a good story. He just says what's on his mind and does whatever he wants, even before he had dementia. And even if you don't want to live with that person there's something appealing about people who are free in the sense they don't care what you think. 'I'm going to say whatever I think. I'm going to live exactly the way I want to. I'm not going to make accommodation for anyone'. That's attractive, although you might not want to live in the same house. I think the character is also at times funny. They go 'funny? He's not funny at all. He's blisteringly a downer'. I go, 'no, he's going to be funny and attractive'. They go 'not at all attractive'. I said 'you'll see'. I mean I just believed it would work with him."

The challenges of making the film were immense, his shooting days reduced for financial reasons so he found locations that fit the bill and let him shoot as much as possible in 25 days in Canada and then a few days in Los Angeles. He needed snow and he was lucky it started snowing just on the Sunday before they began the Canadian locations which made things a little easier. They shot like mad that first week to make sure they got everything weather-wise. He estimates the budget after post-production and all is around six million. It looks great. Cinematographer was Marcel Zyskind.

Although this is his first motion picture writing and directing credit Mortensen has always been unique among actors I know, with an interest in trying many different aspects of the arts, and learning from each one and other directors he has worked with including his Eastern Promises and A History of Violence director David Cronenberg who has a role in Falling, however briefly. "I've been doing that always. I mean whether it's painting or poetry or any kind of art medium, movies for sure, I'm drawn to stories that however the director manages it, draw me in rather than telling me this is what's happening and you should pay attention," he said while mentioning another inspiring moment he had up in the air. "It was almost exactly a year ago I was on a plane flight and sitting next to (the late) Agnes Varda. That might have been her last plane flight. She was not well. We talked about that. I was actually sitting near where her daughter, Rosalie, was. I was talking to her. I said I love your mom's movies. I always thought her ideas in terms of photography and movie-making, storytelling were really good. And she asked if I want to sit next to her. So we just swapped. We talked about everything. One thing she said, which goes to this thing I was saying about not telling people what to think or what to do, how to see your movie, she said something to the effect of don't show things. Give people the desire to see things. In other words, by virtue of the quality of your storytelling, the way you shoot it, in a non-showy way just make people want to come in… Come on in. Just sort of open the door and walk away. That was her style. I always wanted to tell it that way."

So this week at Sundance his first film in telling it his way premieres. He thinks it is the perfect festival for an independent North American story and he's hoping to find a distributor, like many other films on view, but it is important to get the right one. "So I do think it's a good place to start, and it gives us a chance to find somebody who wants to put it in movie theaters," he said and added when I asked about the possibility of a streaming service, "I'm open to anything, but I like to see a movie in a movie theater." Mortensen is very keen on the sound design and thinks that is ideal because the better the sound system, the better the experience. "We worked really hard. It's been a long road," he said. "You never know how people are going to look at a movie. You just have to make it and be faithful to what you're seeing, and hope other people like it. As William Goldman said, 'nobody knows anything.'"