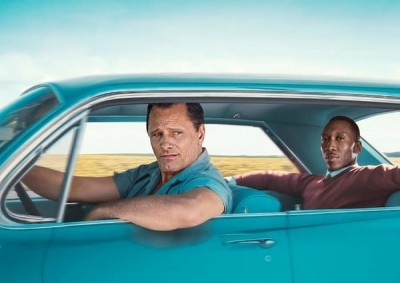 "If I hadn't done it, I wouldn't have learned many things, and I'm grateful for that," the acclaimed Captain Fantastic, A History of Violence, and Lord of the Rings actor told 48 Hills at SFFilm's "A Tribute to Viggo Mortensen," on November 20. "I had lots of good conversations with [director] Peter Farrelly and [actor] Mahershala Ali, especially. We spent so much time together, before, during, and after. Even on the promo tour, we've had some really good conversations."

One such learning moment took place after a Green Book panel discussion in Hollywood, just two weeks prior, when Mortensen got schooled for using the n-word to describe the difference between Jim Crow-era 1962, when the film is set, and contemporary, more progressive times.

"For instance, no one says n–ger anymore," he had remarked in front of a packed room of filmgoers and press, according to The Hollywood Reporter. He would issue a public apology through THR the following day, after appalled tweets from attendees appeared on Twitter, and vowed to "not utter it again."

Recognizing one's own racial biases is a major theme of the poignant film, in which Mortensen plays Frank Anthony Vallelonga, aka Tony Lip, a New York City bouncer, hired to chauffeur and shield Dr. Don Shirley (Mahershala Ali), a renowned Black pianist, from racists while out on a concert tour across the Deep South. The movie, which is based on a true story, takes its title from the "Yellow Pages"-like The Negro Motorist Green Book, a mid-20th-century travel guide, written by Victor Hugo Green, that steered African Americans toward welcoming motels, restaurants, and retail stores in the still-segregated South.

Mortensen's character, the real-life Tony Vallelonga, hails from an Italian-American neighborhood in the Bronx, where people of color are also not welcome. In one scene, Tony throws two of his glasses away after witnessing two African-American repairmen drinking from them in his kitchen. In other scenes, he tolerates and uses racial slurs, and, for much of the film, he promotes racial stereotypes. Vallelonga is so different than Mortensen that the actor worried whether he could do justice to the part after first being approached by Peter Farrelly.

"He's an Italian-American and I'm Scandinavian and look it, sound like it, and move that way," Mortensen said. "Also, I'm not going to ever be that guy, but I would have to be able to take on his attitude and get as close to how he looks at things because I want to understand the character so you can. I don't want to judge him any more than I want you to judge him. I don't want to do a caricature or make fun of him."

So he considered it for almost 24 hours, and upon rereading the "multi-layered," "thought-provoking," and "funny" script a couple more times, he felt that it was just too good a story to pass up. He would take the gamble and trust the director. It only helped that he had Tony's son, Nick Vallelonga, the film's co-writer and co-producer, on hand to work with him on his portrayal.

Mortensen, who's already won multiple film festival awards and is expected to garner an Oscar nomination for this performance, said he has taken something even more valuable away from this experience. As Tony Vallelonga was forced to examine his own prejudices in the two months he spent with Dr. Don Shirley driving across the Jim Crow South, Mortensen had to take a cold, hard look at his own ignorance during the making of the film and after.

"The experience of telling that story like this at that time and trying to take on the attitude that Tony Vallelonga has at the start, I learned that there are just certain things you have to be more sensitive about than you realized," he said. "You can only cure ignorance through experience. And I continue to learn, not just doing the movie or researching it, even talking about it because people throw you sometimes with the things they ask you or situations you're in. You think that people you're speaking to know exactly what you mean, but that's not always the case. Sometimes it forces you to be clearer for yourself as well as for them."