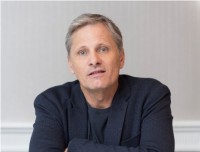 Now 60 years old, the reluctant star of Hollywood is back with a critically-acclaimed comedy-drama film helmed by Peter Farrelly entitled Green Book.

The movie is about Frank "Tony Lip" Vallelonga (portrayed by Viggo), a bouncer at a New York night club who takes on a job as the chauffeur-security bodyguard of famed black pianist Donald Walbridge Shirley (Mahershala Ali) during a tour in the South and becomes close friends while facing racism in the region.

The film gets its title from The Negro Motorist Green Book (usually referred to as The Green Book) which is a segregation-era road travel guidebook to help African-Americans deal with racial discrimination issues and Jim Crow laws like whites-only restaurants, hotels and garages refusing services.

The actor-poet-photographer-artist-composer talked to us about how he embodied his character.

He confessed, "I was nervous at first. Pete thought it would be no big deal. But I was nervous because I am not an Italian or an Italian-American and I didn't want to do a caricature. I didn't want to disrespect people who were that. I am also aware as an actor that there are some really good Italian-American actors and some great Italian-American characters on television and the movies and in recent years, so I was nervous about that, even though the script, there was no question the first time I read it, I was just blown away. I have been in some good movies, Captain Fantastic before this one and either Captain Fantastic and Green Book, normally an actor would be happy to just have one of those in his whole career. So I have been fortunate that I have had a few good movies with good scripts.

"But I don't think I ever read an original screenplay that was that solid, that was that strong, that was that entertaining, well-structured and dialogue that was so sparkling. It was also a profound story. It made me think seriously about history and about where we are at now and all these things. But one of its strengths is that it doesn't tell you that you have to feel a certain way or you should think a certain way. It's not told for one benefit of society or thinking about one group or preaching to the converted. It's just a great story about two people who existed and you walk out of the theater feeling differently than when you walked in and feeling slightly more positive, or maybe a lot more positive, depending on the person, with a little hope for the possibility that individuals can make changes in society. It starts from just each encounter, how you behave with people and you don't have to be afraid to just look at someone and say hello just because you have a feeling that they are different and you may not like them, it's that kind of story. That doesn't come along often and in our times it's valuable on that level too."

Knowing that he is a health buff, did he really enjoy eating all that food in the movie like the fried chicken and hot dogs and how much weight did he gain, we asked.

He revealed, "At first, I really enjoyed it. It was great. It was fun. The food was good, on the set as well, the food that they had that we had to eat in the scenes was really good. After a while I got tired of it because I realized I had to keep eating that amount just to maintain the weight we started the shoot at and sometimes on a Monday I would come back after a weekend and I had just gone back to eating normal for two days. Then on Monday morning, the costume people would say, your pants are a little loose, you need to pick up the pace and have a couple more donuts or whatever, have an extra pizza this time. So my technique, which is a horrible thing to do health-wise, I wouldn't recommend it to anyone, was to have a big meal just before going to bed. You are not supposed to do that, with dessert or a couple of desserts. That was the only way I could keep it to that level. I gained like 40 to 45 pounds."

As for working with Mahershala Ali (Moonlight), Viggo disclosed, "He was fantastic, wonderful. He is a really fine actor and you have seen him in television and movies before. I have never seen a role quite like this and I have never seen an African-American character like this. But even just a character, he is very idiosyncratic, he is a very unique individual."