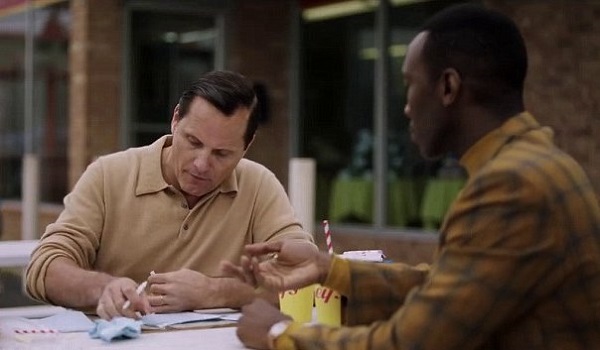 © Universal.
Hold on, just a minute. Has Viggo Mortensen, the hunky New York actor, really been working in films for three decades? Well, yes, he was first seen as one of the Amish farmworkers in Witness back in 1985. And though he's mostly done ensemble or costarring work over the years (Carlito's Way, Crimson Tide, all three Lord of the Rings films), he's also had starring roles (A Walk on the Moon, The Road, Captain Fantastic) and has convincingly played both sympathetic and unsympathetic characters. In Green Book, the based-on-fact story of a casually racist New York man who becomes a chauffeur for a black jazz pianist (Mahershala Ali) on a tour throughout the South in the 1960s, Mortensen gives a vibrant, bigger-than-life, yet nuanced performance as Tony Lip, the driver who sees life very differently by the end of that tour. He plays the part with equal parts of humor, seriousness, oafishness, and a physical beefiness — probably due to his character's penchant to eat, all the time. He spoke about the film at the Toronto International Film Festival.

This is a very timely story, what with the state of race relations in America today. Did you pick up on that when you first read the script?

Oh, yeah. First of all, it's very well written, and it's as much a pleasure to read the script as it is to see the film. I've seen it several times and I read the script several times. I was laughing, I was moved, I was struck by how well constructed it was, and that it wasn't really predictable as far as the dynamic of the relationships. It turned a lot of things on their heads, in subtle ways. It's a movie about different kinds of people getting along. Now, maybe they didn't set out to get to know or understand each other, but they do, by virtue of spending time together. And it's a good story! When you finish reading the script or when you finish watching the movie — I could see this on the faces of people at a screening I just went to — you feel good about people and about the possibility of getting along. That's wonderful! I guess if you're a highbrow movie enthusiast, you might say (he lowers his voice), "Oh, it's one of those feel-good movies." But, so what! What's wrong with that?

Did you find it a big challenge to get into playing this character?

For me, the period of what I call gathering information, before shooting, is always fun. No matter what movie I've done, I've always enjoyed going off in every direction. Until you start shooting, when all bets are off, you can do anything: You can read something, you can get ideas from the news, or from someone you run into in the street. And I fill notebooks, so I've got all this ammunition, these ideas, that you put off to one side, and then you're listening to the other actors and the director, and if you get in a jam, you've got all these things that you've gathered in the back of your mind.

But you haven't really played anyone like this before.

Part of your character's charm is that he does so much writing in the film, sending home love letters to his wife from the road. When's the last time you wrote an actual letter to someone?

I like writing. I send postcards almost every day. I want to keep the mail system going (laughs). It's so nice to get something in someone's handwriting, if there's something personal. I still write love letters, and fortunately I have someone I like to write them to. I also write love letters to my son, even though sometimes they're just a phrase. You know, what defines a love letter? It's whatever you want it to be, if it's got true feeling in it.