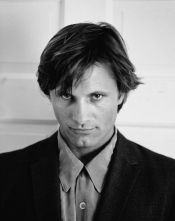 Viggo Mortensen pounds out Demi Moore in G.I. Jane - and poetry in his spare time.

If Jack Kerouac looked like a matinee idol - who in fact turned out to be a really good actor - he'd be a lot like Viggo Mortensen. But if James Dean wrote poetry and took pictures, he'd be closer.

It's hard to put your finger on Viggo Mortensen, because there's been little precedent for the actor-poet-photographer in Hollywood. Or for an actor who's almost better known in literary circles than movie ones.

He is very well known to directors: Sean Penn gave him the lead in his directorial debut, The Indian Runner, after he'd seen him play Alexander Gudunov's brother in Witness. He then played heavies in Crimson Tide, Carlito's Way and Daylight. Most recently, Jane Campion cast him as Isabel Archer's spurned suitor Caspar Goodwood in Portrait of a Lady.

But as the Navy SEAL instructor who beats Demi Moore to a pulp in G.I. Jane, Mortensen is finally entering the mainstream.

Today, hovering over his bicycle outside the Venice, California, poetry center Beyond Baroque, Mortensen's only interested in discussing a reading he organized to benefit the center. He's no dilettante: He's produced two spoken-word albums, a photo show and a book of poetry called Ten Last Night.

'I started writing before I got into acting,' he says. 'I always wrote. Then I started coming to Beyond Baroque about nine years ago and took a poetry workshop. The readings are always great here, but people aren't generally aware of this place cause it's not flashy.'

The same could be said for Mortensen, who's got a smouldering stare and a gravely voice. 'Maybe if I'd just concentrated on acting, I'd be better known. If I save all my money the next time I get paid really well, and just wrote a lot more poetry, I'd probably have a strong body of work. Maybe I should focus on one thing at a time.'

Mortensen, who is divorced, spends half his time with his nine-year-old son. 'I'm pretty much of a loner,' he admits, 'except for the time I spend with my son. I stay home, clean up a lot and write. If getting acting roles were dependent on gregariousness, I wouldn't have gotten them.'

As for getting typecast as a heavy, he just shrugs. 'It's not like you get to do any part you want. Sometimes you gotta just pay the rent.'

In G.I. Jane, Mortensen, buffed and sporting a mean pencil-thin moustache, is Master Chief, the head instructor of a Navy SEALs unit that has its first-ever female, Moore, thrust upon it by a female senator, played by Anne Bancroft.

'He's not a sexist,' Mortensen says. 'He tortures everybody. He needs to know Demi's character can handle what she might run into in combat. And, yeah, we do come to blows in one scene, and, yeah, it's kind of shocking.'

That's putting it mildly. Fellow SEALs look on in horror as Demi gets mauled. 'It was actually a lot of fun,' he says. 'Demi's tough. Yes, tough physically, but mostly, she's tough mentally. That's the major trait of the people who survive this program.

'While Demi and the entire cast endured a mini-boot camp in Florida preparing for the film, I worked with Navy SEAL guys, but on my own for several months. The other cast members, with the exception of Demi, were pissed I didn't go through what they had to go through. And that's what I wanted.'

It was Mortensen who suggested that Master Chief recite a D. H. Lawrence poem at the end of the movie.

'You get to see that, after all the punches, the guy is a real gentleman. And a lot of the real Navy SEAL guys are. But there are bad apples in every bunch,' he says. 'Just look at the movie business. There's a much higher percentage of a-holes in the movie business than there are in the real world.'
Top of this page
Last edited: 4 May 2005 21:00:49
© Lindsay Brice.