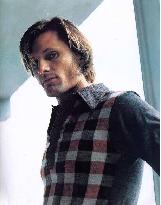 Consider for a moment, Hollywood's latest fetish: the Navy SEALs. Whether portrayed as automated killing machines or the Last of the Real Men, these modern-day Terminators have been popping up with increasing frequency in TV shows and movies. Admittedly there is a strange glamour that attaches itself to people who kill for a living (just ask Al Capone). And SEALs, of course, are the legendary creme de la creme, their murderous prowess honed by tortuous government-sponsored training.

Now consider, if you will, casting. Given that you had to find an actor to convincingly portray a Navy SEAL instructor, the sadistic hardass in charge of pushing these he-man wannabes to the point of humiliating defeat - separating the military wheat from the rent-a-cop chaff - who would it be?

Yes, Viggo. As in Mortensen, the chisel-cheeked Dane previously spotted courting Nicole Kidman in The Portrait of a Lady, betraying Denzel Washington in Crimson Tide, and waxing satanic in The Prophecy. And now, disciplining Demi Moore in Ridley Scott's G.I. Jane, as Master Chief Urgayle.

While he's certainly had his share of roles, both military and violent, Mortensen has not made a career out of playing authority figures. Although he radiates both latent intelligence and charismatic energy, his previous parts generally reflect his atypical (for an actor, that is) reserve.

And yet, as Mortensen tells it, his current high-profile role is not such a departure from that pattern.

"I don't know if I've ever played a part where my word was the law," he ruminates, lighting a cigarette. "But it's a pretty isolated kind of character. He can't afford to let the people he's training know him very well or know what he's thinking. There's always a distance - you have to earn their respect, and also keep it by mentally being careful of how you deal with people."

Being careful is something that comes easily to Mortensen. In person, he is wry and self-effacing, a gentleman in the most old-fashioned sense of the word. He drinks whiskey neat, quotes D. H. Lawrence, picks up the check. From his modest attitude towards his job, an eavesdropper could get the impression that he heads off to an office building each morning.

That is, if the eavesdropper could hear him.

Meaning this: Mortensen is uncomfortable speaking about himself, and mutters inaudibly when forced to do so. He's much happier discussing philosophy, sharks (an obsession since childhood), and worthy causes - like Venice Beach's struggling poetry centre, Beyond Baroque.

"Poetry is something that I'd always done, long before I even thought about the idea of acting," he recalls. "But I'd never done it in public, read anything. As an actor you're always reading someone else's words, and then what you do gets edited. So there's several screens through which you're speaking, if at all. As a poet, it's your words."

Putting his money where his words are, Mortensen has released a book of poems, and (more recently) a spoken-word CD that features, among other things, an appearance by his ex-wife, former punk siren Exene Cervenka. Stark and unassuming, his poems exude a quiet clarity.

"I can't really separate acting and poetry," he states. "There's the same discipline. For me, why I like poetry, or when I feel it works, it's because you potentially can provoke a lot of thought with a very limited space and carefully chosen words. To me, acting is the same. I like to refine something until it's saying what needs to be said, as economically and as direct as possible."

He takes a drag on his cigarette, exhales, and clarifies. "Not a lot of waste in terms of showing off or going off on tangents."

This idea, of impure intentions, is one that Mortensen returns to repeatedly. The unworthy, undignified need to get attention. To show off. To be flashy or exhibitionistic. But the worst sin of all, in Mortensen's moral hierarchy, is doing good deeds for self-serving reasons.

"Business and PR and ego," he says sardonically. "In the movie business, there aren't that many good intentions."

Mortensen goes on to explain that he relishes "the idea of actually doing good work. Not thinking of your place in the pecking order on a movie set. Not thinking of what you can get out of it."

He shakes his head, ruefully.

"There's a lot of chaos caused by in-fighting. It sometimes makes me doubt the business or my place in it."

These comments naturally beg the question: Is he talking about his G.I. Jane co-star Demi? But he has nothing but kind words for the screen diva, whom he admiringly describes as "really tough. And I think she's really good. Not that she's starving or anything like that. But I guess as a performer, it's good for her that she did this part - and that she did it well. I think - I hope - that people will have respect for her."

Speaking of hopes - if he could fulfil one wish, what would it be?

He considers, for quite awhile. Lights a cigarette, stalling, then speaks. "To know, preferably before you do it, but certainly immediately as you do it, that you've insulted someone. Or offended someone."

Not wealth. Not fame. Not true love, or spiritual satisfaction - his true wish is - greater sensitivity.

He continues: "And I'd like a dignified exit from this line of work and from life in general. When I go, I'd like to go with some dignity and some honour."