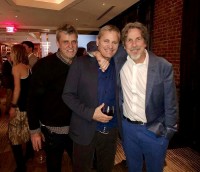 'Green Book' after-party, Boston - 20 October ….
© Nicole Russo.
There was no escaping several stars at Scampo this weekend. Apparently, following a sneak-preview for the upcoming film Green Book, an intimate cast and crew after-party took place at the Italian eatery on Saturday night.

We're told that after a private screening and Q&A held at Harvard, the film's director, Peter Farrelly — previously of Something About Mary and Dumb and Dumber fame — as well as its lead actor, Viggo Mortensen, and fellow star Linda Cardellini, all headed over to the Liberty Hotel spot. The pack of celebrity partygoers were joined by major hospitality player Patrick Lyons, whose Lyons Group owns Scampo.

'Green Book' after-party, Boston - 20 October ….
© Nicole Russo.
The fete also just so happened to fall on Mortensen's birthday so the chefs at Scampo — namely Lydia Shire and Simon Restrepo — made him a special tray of celebratory treats. The whole Hollywood gang sang "Happy Birthday" to the actor and he blew out the candles atop the confectionery creations.

Green Book, set to hit theaters Nov. 21, is a comedic drama that Farrelly directed solo — sans his brother and frequent project partner, Bobby Farrelly. The story is based on a real-life tour of the Deep South that classical pianist Don Shirley (played by Mahershala Ali) took in the 1960s. He was accompanied by New York bouncer Tony Lip (Mortensen), who acted as his driver and bodyguard, and Lip's son, Nick Vallelonga, wrote the screenplay alongside Brian Hayes Currie and Farrelly.

The flick made its world premiere at the Toronto International Film Festival last month, when it won the People's Choice Award.