Binoculars to listen to poetry

By Alba Carmona - translated by Ollie 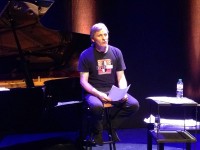 "Ramas para un nido" poetry reading, Aphonica ….
© Silvia Susana Flores.
His own poems, works from other people and the accompaniment of a piano were the only weapons that the actor needed to thrust the blade and leave the concert hall in Banyoles with a standing ovation.

The North-American, son of Aragorn from Lord of the Rings [sic] and heir to other memorable characters, like the Russian mobster from Eastern Promises, opened on Friday the Aphonica Festival with Ramas para un nido, a performance on a naked stage, sold out days ago, in which the poetry recited is reflected by the melodies of Rafel Plana´s piano.

Dressed in black from head to toe, Mortensen changed the uniform of a legendary character to get in the skin of the rhapsodists. Barefooted - he parked the sneakers on stage as soon as he came in- and with a disorganised bundle of papers in his hands, he opened the reading singing Bob Dylan´s Masters of War.

"Thank you for coming on this rainy night...We almost didn´t make it! We have suffered a little oil explosion when we were in Maçanet, on our way here, and we have messed the car good and proper, doing everything you don´t have to do.That´s why our hands look so black...luckily so are our clothes," he joked before getting into his poetic repertoire, where he reflects on everyday life, violence and the mechanics of writing. He was only interrupted by the ringing of a cell phone of someone sitting in the first rows, who got a half serious, half ironic reproach from the actor.

Alternating Spanish, English and Catalan, he went jumping from his own poetry to that of others, with works from the Argentine poet Fabián Casas or María Mercè Marçal, from whom he borrowed El meu amor sense casa (My Love Without a Home), a poem, he says, that reminds him of the refugees drama despite being written in another context. The same happens to him, he said, with Tonada del viejo amor, a popular Argentine song he used to bring the evening to a close.

Acclaimed by an audience full of followers, especially female followers -so much that some of them came prepared with binoculars to see him as close as possible- he came back on stage with Plana for an encore. Then, he gathered the bundle of papers, the shoes, and left in another round of applause. The feeling lingered that had he gone on stage to read the manual of a washing machine, it wouldn´t have changed the warm reaction of the audience.