By Bernat Puigtobella - translated by Ollie 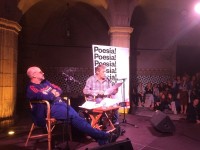 The setting incomparable. The temperature perfect. The cloister of the IEC, which became too small to accommodate an audience curious to discover the poetic facet of the Danish actor, was packed. The bait was Viggo Mortensen, yes, but the fish was Fabián Casas, who got the audience eating out of his hand with his poems. Fabián Casas is a cult author in his country, where he has published poetry, essays and fiction. Mortensen lived in Buenos Aires until he was 11, and he still feels very attached to it.

"A poem is the flower of a lie," says the actor, "the record of a failure, a homemade bomb built more or less well. Poetry must be protected from the poem, and above all from the poets. " Mortensen, publisher of Perceval Press, where he recently self-released the CD Preguntas desde la orilla (Questions from the shore), applauded yesterday the poems of his reading partner, with whom apart from the love of poetry he shares the passion for Argentine football club Club Atlético San Lorenzo de Almagro.

Mortensen is an admirer of the poetry of Casas, to the point that he applauded every poem his partner read. Between poems, Casas explained that his last collection of poems was written against his ex-wife. After a long year of depression, under medication, he has written a volume of prose poems entitled Poetry on Prozac.

We were in the temple of philology and the reading was an opportunity to learn some Argentine lingo, like pochoclo, which means popcorn, or garrón, which is synonymous with disappointment, the disappointment you feel when you're about to get something ultimately not fulfilled [tr. note: aka "bummer"]. Mortensen dedicated the poem 'Garrón' to the Colchoneros [tr. note: Atlético de Madrid], who this week almost defeated Real Madrid. 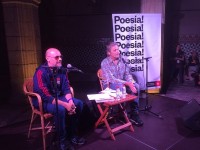