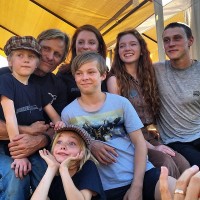 © Nic Hamilton.
The themes of Captain Fantastic, that held its world premiere in Park City as part of the Sundance Film Festival, will strike a chord with a lot of families.

The central figure of the film is Viggo Mortensen (The Lord of the Rings: The Return of the King, The Road) who plays a father intent on raising his children to be politically-aware philosopher geniuses, who can also live off the land in their paradisiacal Oregon forest home.

The film explores the merits of homeschooling and parental rights. It also challenges the social mores of protecting children from information.

"Good movies ask a lot of questions but don't necessarily answer them," said writer and director Matt Ross to KUTV just before the premiere. You might know him best as Alby Grant on Big Love, or his face might also be familiar from supporting roles in many films. He also has extensive writing and directing credits.

"I had a lot of questions about being a father and parenting that I wanted to explore," he said. "[There are] a lot of people in this country and all over the world that live outside of society. Viggo plays the father that people, that I, sometimes fantasize about being."

Mortensen was there at the premiere and red carpet along with the actors who portray the kids who make up his family.

Bypassing the cardinal rule of filmmaking, not to work with children or animals, Ross and Mortensen chose a film with some or all of the six children in almost every scene.

"I am a dad and there is no such thing as a perfect father and mother and this character is doing the best he can," Mortensen said.

His character leads his family in living off the land, growing and eating organic food and hunting and dressing game from the wild, including the youngest children who get knives for Noam Chomsky day, instead of video games for Christmas.

"I wasn't really scared about the kids," Ross said. "My fear about having a lot of kids is just time; time management. Kids have a real sense of play, they don't have a fear of failing. They just want to play and have fun, which is what great acting is."

The youth performances are all solid and they are written and played differently. Each of the children has a personality and moments to connect with audiences.

The children were also pretty excited to be at Sundance and seemed to be having fun on the red carpet. As they are in the film, they were each impressive with the smallest getting a lot of notice for being adorable.

Mainstream audiences, and the film has distribution, will find the ultimate progressive parenting foreign, but may also suffer some guilt for not striving a little harder to focus on education, health and self reliance.

As a counterpoint, the film offers some grandparents, who doesn't share what they term as the "hippy" viewpoint, who want the children raised in a more traditional way. They do come off as one dimensional instead of the nuanced characters that make up the film's central family. Still, audiences will understand their mainstream motives.

Some conservative Utah audiences will find the family's casual attitudes toward nudity and language shocking, but the film doesn't shy away, as Ross said, from asking tough questions or challenging ideas.

It also has some touching moments. The film lacks the cynicism to shy away from what could feel like manipulative emotional moments. While it does walk the border closely, Ross steers clear of become sappy.