Viggo Mortensen gets lost in the art-western 'Jauja'

Source: Metro (U.S.)
A movie star gives himself to the whims of Lisandro Alonso, one of international art cinema's budding talents. 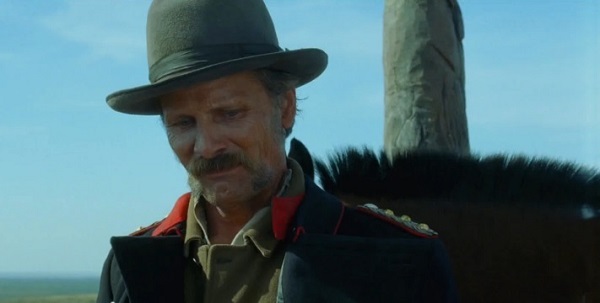 © 4L Productions.
Jauja is more than just another Tarkovsky-ian minimalist art film. It's a jumble of things that don't ordinarily go together, forced into a shotgun wedding. It's another movie with long take master shots, ones that force brave viewers to adjust their sense of time passing, if not learn to outright ignore it. (It's also shot in the now trendy "Academy ratio," i.e., a frame size roughly the same as old TV sets.) But it's also a Western, albeit one set in Argentina and following Danish immigrants. They're part of a plot that smacks of The Searchers: After being deployed to the nation's sparse, rocky Patagonia region in the 19th century, Captain Gunnar Dinesen finds his young daughter has run off with a guy, sending him into the unknown to find her — or disappear himself.

Then there's this: Gunnar is played by Viggo Mortensen, a legitimate name actor, and one whose profile will elevate this tiny, uncompromising, demanding art film to more noticed heights. Mortensen doesn't stick out that much, though; he's an actor who's taken his iconic Lord of the Rings role and pursued more esoteric (and sometimes non-English language) alleyways, in part because he would have done that anyway. (Mortensen moonlights as an abstract painter, photographer and poet, and has recorded over a dozen experimental albums.) He largely surrenders to his boss' vision; it's a film with little dialogue, requiring either sitting around on rocks or patiently climbing same.

Not that he doesn't bring a depth of character anyway. Mortensen doesn't get many chances to put his character's feelings into words. He's only called on to do slightly more than the stars of previous films by Jauja director Lisandro Alonso, who tends to work with non-actors who, as Mortensen does here, also trawled across unforgiving landscapes: a jungle in Los Muertos; snowy hills and rotting small towns in Liverpool. Those films were stripped down to the nub, whereas Jauja is next level, which is not to say better or worse. The addition of a real actor (although he's not the only one, just the most famous) makes it easier to fear for Gunnar as he gets lost in what very quickly feels like a fool's mission. It's absurd to think our hero could ever track down his daughter in an alien country, even before things start to turn deeply strange and dreamy. He's off the map even before he's robbed of his horse and most of his possessions; from the start he's destined to be lost in and swallowed up by nature, red in tooth and claw and utterly disinterested in the plight of insignificant humans.

Right from the start, though, Jauja seems weird. The mix of things that disparate, maybe contradictory elements — Danish immigrants in an Argentine Western made by an art film director and starring a movie star — mirrors the very way Gunnar will disappear into a world he does not and cannot understand. Like all of us, he's a rationalist who expects the world to work a certain way, and is helpless when it does not — an all-the-more gutting and alien feeling in a world of connectivity, where we don't traipse off to an unknown, far-flung locale without Googling our every step long before we make them. Where Jauja winds up is bizarre, even for an Argentine art-Western, but the move makes sense if you catch on its wavelength, a task made all the easier due not only to its gradual, hypnotic pace — typical of master shot art cinema — but its playful tone. Everything is right from the start — from the boxy aspect ratio to the way the lighting makes the on-location shots of nature look artificial. Everything looks fake and real at the same time, creating an imaginary space in which it's a pleasure getting lost.