By Viggo Mortensen - transcribed and translated by Ollie and Zoe

Source: Premios Fénix
On 30 October 2014 Viggo received the Best Actor award at the Fénix Awards (Premio Iberoamericano de Cine Fénix®) held in Mexico City. It was in recognition of his role in Lisandro Alonso's Jauja.

This is a translation of his acceptance speech on that night. 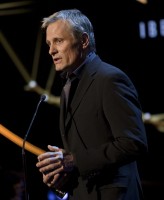 Viggo accepting the Best Actor award - Fenix …
Image Mario Vazquez de la Torre.
© Secretaria de Cultura Ciudad de Mexico.
Thank you very much, Thank you, Lisandro... Well, my father is from Denmark, I´ve lived in that country and speak the strange language they speak there. And for many years, I'd dreamt of working, in Danish, under the helm of one of the great Scandinavian film directors. And so the occasion finally arrived. It took place deep in Patagonia. Lisandro Alonso is a great Danish director because he´s done something very special. He has achieved something very difficult to do: he´s made a movie that is as Danish as it is Argentinian in its tone, its... well, sense of humour, the sensibility, the pace. Everything is very... We premiered it for the first time in Cannes; there were many Scandinavians there - journalists and all the Danish actresses that appear in the movie - and they were laughing out loud. They appreciated it in a different way. They were a very different audience, but they loved the movie. And when we have shown it to a Spanish-speaking Latin audience, they´ve noticed other things. You´ve done a very lovely trick, Lisandro and I feel very proud of having worked with you... [laughing and replying to Lisandro in the audience] I love you too... and then to say that I´m part of Lisandro´s creative family who have helped him tell this existential dream called Jauja. Thank you very much.
Top of this page
Last edited: 1 November 2014 13:48:46