Viggo Mortensen: "If The Lord of the Rings can win 12 Oscars, I don't see why Avatar wouldn't win the Oscar for best film."

Source: Premiere (France)
For the filmmaker Lisandro Alonso (Jauja, a contemplative western film selected for Un Certain Regard), Viggo Mortensen accepted to become lost in Patagonia. The star of The Lord of the Rings tells us what he found between an actor's challenge and a trip through space and time. 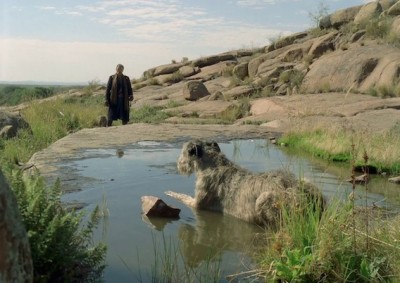 © 4L Productions.
How did you meet Lisandro Alonso?

I met him in 2006, very briefly, during a film festival. Then in 2012, because my friend (he switches to French) the Argentine poet Fabiàn Casas told me he was working on a script for Lisandro. And Lisandro wanted to speak to me about it, so we met during the filming of another Argentine film, Everybody Has A Plan, by Ana Piterbarg. He told me he wanted to make a film that takes place in the 19th century, where a Danish man is looking for his daughter who has run away with a young Argentinian soldier. A strange sort of western. That got me very excited!

In your opinion, Jauja is a western?

Yes, I think so. An existential western ... A western that would have been filmed by Tarkovsky. It's a strange film, because it's as much Danish as Argentine. Maybe even more Danish than Argentine, visually and in terms of sensitivity, especially in the sense of humor. Which is a good thing! (laughs)

You recently declared that there were too many special effects in The Lord of the Rings and The Hobbit. Are you done with digitalized blockbusters?

It turns out that I prefer things more organic, with fewer effects. But I didn't exactly say that, it's true I talked about my tastes, but I also repeated for the thousandth time the positive things about the trilogy. They are unfortunately not included in the article ... The success of that Peter Jackson film opened numerous doors for me. The filming was also an extraordinary experience in New Zealand. So I'm repeating it again in this interview, in the hope that you won't cut it out! (laughs)

As far as being an actor, you prefer films like Jauja, more 'organic' to re-use your adjective?

Yes, in general. Even if the special effects sometimes work marvellously. I'm thinking for example of Avatar, which is a very intelligent, magnificently directed film. If The Lord of the Rings can win 12 Oscars, I don't see why Avatar wouldn't win the Oscar for best film. The juries, at the Oscars just as in the festivals, are always subjective, and sometimes it's difficult to understand why certain works are forgotten. Why has David Cronenberg never been nominated for an Oscar? It's strange. It isn't logical, so I don't take the awards very seriously.

For a star like you, playing in this low budget Argentinian movie, did this give you a sense of escape?

In a blockbuster as in a small, conservative film, the relationship with the camera is the same. You have to know your lines of dialogue, the interaction between the director and the actors doesn't really change according to the budget. That being said, finding myself with a small team in the middle of nowhere, in the superb landscape I knew because I spent my childhood there, it made me happy. And it was liberating. As much as Lisandro is open-minded, cooperative, not pretentious. Horseback riding in Patagonia, which reminded me of when I was a little boy. Also, I had to speak an old Danish, the Danish spoken by my grandfather – a country man. It was the first time I've spoken Danish in a movie. So on several levels, I was experiencing a return to the past, a little bit like my character, for whom the time line becomes confused. It was very unusual ... a good challenge. It was a little bit like the camping trips I used to take in the region with my family, as a child: far from the telephone, the internet.

As a painter, what do you think of the way the director Lisandro Alonso compacted these Patagonian landscapes into an almost square format?

It reminds me of the old westerns. It's very beautiful, it changes the panoramic.

You learned some things about yourself during this unusual and wild experience?

It was interesting to work with a director who does long shots, without being afraid of the calmness and the length of time: in front of the camera, everything you do becomes interesting. It's the first time that he was using professional actors, but in the film, we don't look like actors, we just look like people. People who are having real experiences. In these conditions, it's impossible to make a mistake. It's a strange feeling as an actor. What you do will be in the film. That gives you confidence and peace of mind.

You don't talk very much in the film, was it a challenge to give consistency to the character?

No, you know Aragorn didn't talk very much, either. In History of Violence, my character expresses himself a lot in a non-verbal manner. I like that. But I also like talkative roles, I like the change.

In the film you meet a mysterious dog. How was that, working with it?

The dog was incredible. His trainer is a fan of the San Lorenzo soccer team, just like I am.