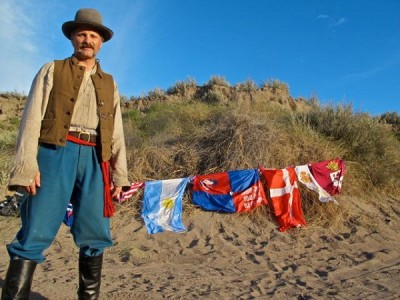 Viggo's involvement in the film was not just as an actor. He had even collaborated with the Lisandro, helping him choose music for it. "Lisandro told me he wanted to have a break between scenes, and I said you should listen to Buckethead, very strange music, to shift the tempo. I happen to know Buckethead personally, as I had done some work with him."

"In the 60's, when I was between 7 and 9 years old, my father brought my brothers and I and our mother to that part of the country several times. Camping trips. At that time the roads were not as good as they are now. We travelled slowly and the landscapes seemed immense and beautiful to me. I remember that we once passed through Viedma (I suppose by way of Highway 3 from Bahía Blanca) and went along the coast as far as Península Valdés. Our car had a serious breakdown and we waited several days in Puerto Madryn until our car could be fixed. The peninsula and its animal life were not yet protected. We swam very near seals, elephant seals. At that time, there were people who killed many of those magnificent creatures with rifles and shotguns. My father loved those animals and that place - so much that I remember he wrote several times, as others did, to people in the federal government to ask that the peninsula be designated a National Park. I don´t know whether his letters helped, but finally it was decided to suitably protect that special place.

Viggo Mortensen: "It's a shame that the government has cleared the way for open-pit mining."
By - translated by Ollie, Rio and Zoe
Noticias Net-Rio Negro
21 April 2013