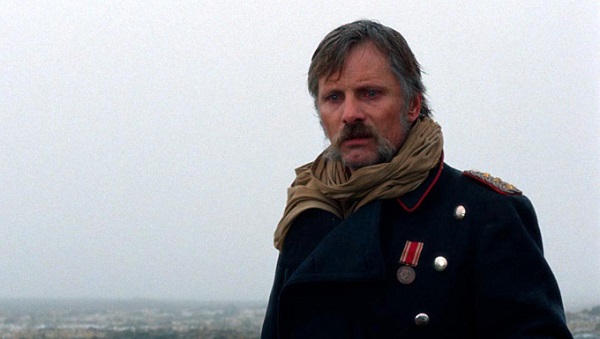 © 4L Productions.
I don't see Viggo Mortensen as a Hollywood star. He is an extremely charismatic actor who doesn´t speak too much, he is all physicality. His acting gives priority to body-language and the gaze. - Lisandro Alonso

'He´s an actor who takes risks, as he proves by acting in my film. According to him, it´s an experimental movie, and coming from him it might seem this is a film by Andy Warhol. But he knows very well what he´s doing. He´s seen Los Muertos four times and he´s completely aware of the risks he´s taking, the same as me.'

How was it working with Viggo Mortensen? Is it hard to direct a big movie star considering that in your previous films they were non-professional actors?

Viggo is directed by himself, doesn´t need my help; he is an amazing actor, a unique person, a dream producer. He thinks 24 hours a day about the film; he is insatiable when thinking ideas, dialogues, suggestions for enhancing the images, the work of the group in general, and with the other professional and nonprofessional actors who acted with him in different scenes from the movie. I was very lucky that he liked the story.

"It must be said that Viggo not only ended up acting in the film, but he shouldered the production, did some tweaks in the story, was always active and in good spirits, I´d say, [he was] thinking about the film 24 hours a day."

Lisandro Alonso
"It´s a mixture of spaces, times and languages."
By Diego Brodersen - translated by Ollie and Zoe
Pagina 12
27 October 2013

'I don't see Viggo Mortensen as a Hollywood star. He is an extremely charismatic actor who doesn´t speak too much, he is all physicality. His acting gives priority to body-language and the gaze.'

Would you have ever thought that someday you would work with a movie star like Mortensen?

I met Viggo at the Toronto Film Festival. He was premiering Alatriste in 2006, and I was there with Fantasma. I exchanged a few words with him while we were drinking a couple of beers at a party; he seemed like a likeable guy and I thought about him, the way someone would fantasize about playing on the national soccer team. Later, I started to look into the things he'd done, and it seemed more striking to me than his career as an actor. There's no doubt that he's an extraordinary actor, but I was interested in something of a different nature. Something more related to the idea of the "model" in Bresson's [work], a quality.