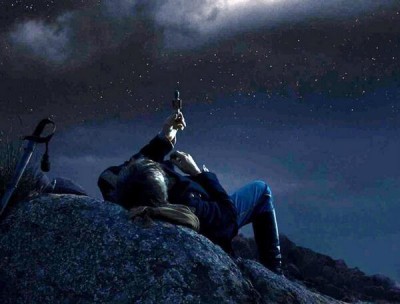 ...Dinesen here becomes, in outline, the typical Alonso figure—a man alone in the wilderness, heading towards an uncertain destiny—Mortensen plays him as both an Alonso actor and a star: he's pure physical presence, strength and frailty combined.

To grease this genocidal wheel, the Danish engineer Gunnar Dinesen (the superb Mortensen, who also co-produced pic and co-composed its original score) has arrived with his 15-year-old daughter, Ingeborg (Viilbjork Agger Malling), in tow, charged with a surveying project in this soon-to-be "civilized" land.

A wonderful reflection on the evocative power of cinema. And, incidentally, the umpteenth confirmation of Viggo Mortensen´s great talent. Mustachioed , astride his horse in a cavalry uniform, sword in sheath and a splendid hat on his head, he is reminiscent of John Wayne in the early John Ford films.

The film is made up of postcards of a time and place closer to the primordial, which makes the efforts of men upon and within it seem ridiculous, though with the firm possibility of attaining nobility. Mortensen's Dane certainly does, in a tremendously moving performance literally and emotionally, a performance that moves itself and one. A single close-up upon realization of his daughter's disappearance and the quest it will entail becomes a tender conduit, a portraiture of a historical human that is unspeakably, indefinably beautiful. And from there he plunges away from his tent-and-soldier edge of civilization into a beyond that is only the older world.

Mortensen turns the captain into a clumsy, huffing and puffing clown in his fine double-breasted uniform, sword and rifle, who has trouble mounting a horse. Though mostly a risible character, he's partially redeemed by his burning love for his daughter that keeps him searching for the rest of the film. His brushes with the mysterious Zuluaga are fleeting but deadly, marked by ancient looking totems and barbaric savagery... Mortensen also gets co-producer and music credit for a couple of fine modern pieces saved for the end of the film.

This is the kind of philosophical, deeply visual filmmaking which many will be able to appreciate, and my respect for Viggo Mortensen (who is a magnanimous minimalist here) has sky rocketed.

Nikola Grozdanovic
Way Too Indie
18 May 2014