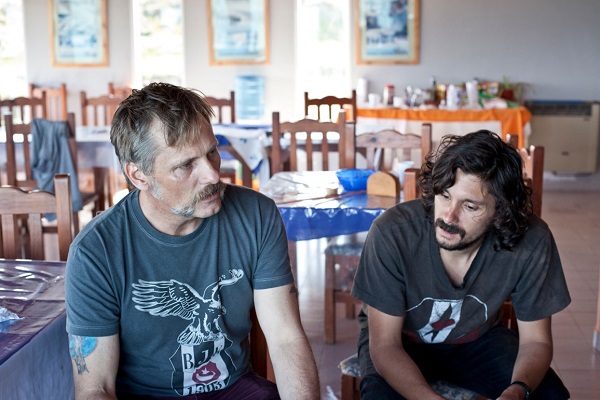 Image Guadalupe Gaona.
© 4L Productions.
He joined in because he backed it and believed it was worth it; for that, I will be eternally grateful. - Lisandro Alonso

Some months ago, unthinkable, unpredictable news appeared: the famous American (and Danish) actor, Viggo Mortensen, the one from The Lord of the Rings, would be the star of the new Lisandro Alonso film, still untitled, spoken in Danish...

The Lord of Independence
By Roger Koza - translated by Ollie, Rio and Zoe
La Voz
7 April 2013

'At first I thought I would make a film about an English family, which would have been plausible as in Argentina the first settlers were the Spaniards before the English arrived. But I didn´t want to give the film a historical dimension and that people could pay attention to the clothes or the behaviour of the English who lived in the 19 century. It turns out that Fabián Casas [co-writer] is a good friend of Viggo Mortensen; they are both supporters of the San Lorenzo soccer club. The fact of choosing him as an actor and making the film about a Danish family seemed to me more strange and, therefore, more appropriate.'

'When we began to sketch out [outline] the story, the main character was British. Later we decided to move away a little from the context of the English in 19th century Argentina. It occurred to us that the character could be Danish and then we thought about him. So with him in mind, we continued rewriting the film and Viggo also began to get involved and to provide lots of ideas.'

'I had seen him only once at the Toronto Festival many years ago. We exchanged two or three words and he gave me a San Lorenzo pin - he's always going around giving people those things. I liked him very much; right then I realized that we could treat one another as equals. He's an actor I love, among other things for the way in which he transmits emotions physically, gesturally. He's not an actor who's usually given great lines of dialogue, but you see him, for example, in the final scene of History of Violence, David Cronenberg's film, and you realize how incredible his work is, the things you can read in his face.'

Lisandro Alonso
"It´s a mixture of spaces, times and languages."
By Diego Brodersen - translated by Ollie and Zoe
Pagina 12
27 October 2013

How did Mortensen join the production?

Viggo liked the story, and he saw we didn´t have enough structure to address it. He joined in because he backed it and believed it was worth it; for that, I will be eternally grateful. I think he is one of the best producers I've ever had in my entire film history. Hopefully there will be more actors who want to produce, because we need them.