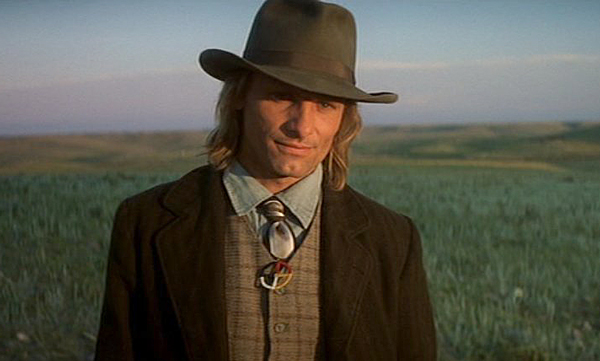 © Touchstone / Buena Vista Pictures.
Okay girls (and guys, if you're that way inclined), you can stop crying now. Just because you can no longer see Viggo Mortensen playing the oh-so-bonkable Aragorn doesn't mean you have to miss out altogether. Yep, lucky us, we get another chance to perv at this talented actor up on the big screen. (Ev, stop drooling – Ed.)

He's lost the facial hair, gone blonde and carries a pistol instead of a sword, but he's still one mighty tough dude in his latest role, that of true life cowboy Frank T Hopkins.

Set in 1890 this amazing tale about a man and his mustang horse, Hidalgo, takes us on an incredible journey from America's Wild West all the way across the Sahara [sic] desert. It's one awesome trip!

After delivering the orders that resulted in the massacre of Wounded Knee Creek, dispatch rider Frank T Hopkins (Mortensen), who's half native American, becomes the star of Buffalo Bill Cody's (J K Simmons) Wild West Show where Frank's horse is touted as the greatest endurance racer in the world.

This enrages Sheikh Riyadh (Omar Sharif) who dares the cowboy to prove it, inviting him to enter the Ocean of Fire, a 3,000 mile race across the Sahara [sic] where Hidalgo will be competing against the world's finest Arabian thoroughbreds.

Frank's not so keen, but when Annie Oakley (Elizabeth Berridge) and the rest of the Wild West show's cast donate the entry fee, he and Hidalgo find themselves on a ship bound for the Middle East and the unknown…

I don't know about you but I love a great adventure story, especially when it's true. I also love movies that take you into a different world and Hidalgo certainly does that.

It's one wild ride! Think Lawrence of Arabia meets Seabiscuit, with a touch of Indiana Jones and The Mummy thrown in for good measure. And don't worry all you horse lovers out there, nothing overly gruesome happens to any of the horses. Admittedly one breaks its leg and has to be put down, but that's about it.

Does the "painted" horse raised on the American prairie stand a chance or will he and Frank succumb to the perils of the desert?

You'll just have to race to your nearest cinema to find out! (Oh, and take some tissues!)