By - translated by Zoe 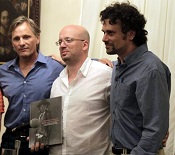 Viggo presents 'Hijos de la Selva' at the Museo …
Image Andres Cristaldo.
© EFE.
Asunción - This Friday in Paraguay, the American actor Viggo Mortensen launched the book Hijos de la selva," [Sons of the Forest], by the Argentine anthropologists Federico Bossert and Diego Villar, who compiled the photographic and documentary body of work of the German scientist Max Schmidt about the indigenous peoples of Paraguay and Brazil.

The book introduced in Asunción and which will go on sale next October 15th intends to restore the figure of the adventurer/researcher Schmidt, who travelled tirelessly around Paraguayan Chaco and the Mato Grosso region of Brazil at the beginning of the twentieth century, as the authors explained at the press conference.

Schmidt's photographs, personally chosen by Mortensen, show members of indigenous communities almost unknown before the German researcher documented them, in day to day activities, with gifted portraits made with a heavy, old glass plate camera with which he toured the forest.

Schmidt directed the Andrés Barbero Ethnographic Museum of Asunción, that now houses all of his collection of images and objects amassed and classified and where this Friday the presentation of the work was celebrated.

The authors narrate the misadventures of the German researcher in South America on his journeys to remote places in the Brazilian forest and the arid Chaco region in north-western Paraguay, which brought on diseases for him like malaria and leprosy.

"His journeys were highly unusual catalogs of misfortune, but he managed to gather a huge quantity of very detailed information," emphasized Diego Villar.

"Even when he was successful, bad luck showed up. He lost tons of documents and his work was not recognized until years after his death, as opposed to other anthropologists of the era," added the author.

Bossert related that the principal objective of the book is ethnographic and that they hope, in this way, to "restore faces and scenes of everyday life already lost in Brazil and Paraguay."

"These photos are a privileged testimony to a way of life that would be quickly extinguished," added Bossert, who described Schmidt's "humanist, romantic and even humorous" vision of indigenous life.

Schmidt also travelled around the northwest area of Paraguay after the Chaco war that confronted that country and Bolivia over the territory between 1932 and 1935, documenting the life of the indigenous people that had been displaced by the battles, refugees exiled from their homes.

Mortensen, the actor known for the cinematographic saga, The Lord of the Rings, explained how five years ago he joined in the project to restore Schmidt's body of work in a book because he was very impressed by his photographs.

"The photos are incredible; that's the first thing that attracted me. This books makes an academic and artistic contribution, with the portraits full of aesthetic beauty beyond the visual documentation," added Mortensen, who said that the German "is at the same high level" as the American Edward Curtis, who documented the native peoples of North America in the same era.

"These photos are a legacy for the people of Paraguay and I ask their cultural authorities to support funds for the Museo Ethnográfico because they work with a lot of love but with very little money," declared the actor.