By Ester Aguado - translated by Ollie and Zoe

Todos tenemos un plan is a truly unsettling work, nothing to do (or does it?) with the nature of this huge actor. 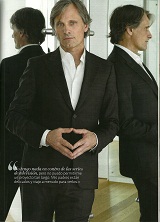 Woman magazine (Spain) - September 2012.
© Woman/Grupo Zeta.
An odd bird, this Viggo who instead of arriving at the interview in a limousine with three secretaries fluttering around, in the style of the great Hollywood stars, comes alone, taking a walk with his cloth shoulder bag, where he keeps his mate and a copy of The Little Prince in French. He is shy: 20 minutes of talk are necessary for him to begin to smile...and another 10 for him to joke. Afterwards, he begins to unfold the verbosity of an Argentinian...Stop! The magic collapses when the photos begin; he feels uncomfortable posing, dressing as if he were another, talking about himself. Strange American actor, with such an under-developed ego. The editor is grateful for it, the photographer, not so much.

I´ve been told that the other day, in Madrid, you went to buy a very expensive bottle of wine and the shopkeeper asked whether you had enough money to pay for it...

(He smiles) I dress casually and I move through life in a natural way...you can find me any day playing soccer with some children in the park. Mine is only a job.

And what does Viggo do when he is not working?

To live? I read hundreds of scripts that come to me (I do it even if it takes me several years), I write every day, I draw a little, continue with my photography and, if I find a piano, I play because it soothes me...but I also watch soccer matches. When I can´t write or it´s hard for me to compose a character, I see other people's films, I go to the theatre or I drop by some exhibition. It's a lucky thing to live in Madrid, a vibrant city.

You just premiered On the Road in Cannes, and this autumn you shoot The Two Faces of January, based on a novel by Patricia Highsmith. Was it difficult for you to shoot Todos tenemos un plan in Spanish?

No, I learned English and Spanish at the same time, so I feel just as comfortable. The difficulty shows up when you have to vary your accent, but since here I play two Argentinian brothers, it was very liberating. To return to the country where I spent my childhood, bringing out my Latin side...that involved a transformation. But I love challenges. And, besides, just like Agustín, one of the characters in the film, I learned a good lesson - I cannot return to the past.

You met the director and scriptwriter, Ana Piterbarg, in Boedo (Buenos Aires,) coming out of the San Lorenzo de Almagro sporting club. She approached you on the street...

Well, she seemed nice and I listened to her (laughs.) She said to me she had a very interesting story she wanted to make into a film. I told her to send me the script and I was impressed. It was very well written. A special story, pure film noir.

It´s a terrible story, mainly because it´s absolutely real and believable. Who gets the credit?

The actors have done an excellent job; the casting - Daniel Fanego, Javier Godino, Soledad Villamil, Sofía Gala Castiglione - is very good, but the credit goes to the script. There aren´t any superheroes here; all the characters are frustrated people, rancorous, useless. And if they don´t get over it, they won´t be free. They all lie and it´s thanks to that, that they reach the truth.

Do you have any theatre project? We loved seeing you last year in Purgatorio, with Carme Elías...

At present, there's nothing. Except a film for next year, about Albert Camus, that I will shoot in French. The experience in El Matadero was hard, but interesting. I learned a lot. You are completely alone on stage and that is very scary. My total respect to those who do theatre all the time, because that really makes you strong.

Is it so different from cinema?

Actually, no. If you believe in yourself as an actor and you put yourself into the character, there are many possibilities for the audience to live it with the same intensity in a movie theatre. Purgatorio was like making a film, but with a much longer take. (He laughs.)

"To play the part of two brothers was a creative challenge. There were many shots where I had to talk to nothing, without anyone giving you a reply. When I got used to it, it was fun. The shoot was really clever, with the technical team devising solutions to film those sequences credibly. We had a tight budget," explains Mortensen. It's the first time that Viggo, as the head of Perceval Pictures, has produced a feature film.

"I have nothing against TV series, but I can´t allow myself such a long project. My parents are frail and I often travel to see them."