By Nazareno Brega - translated by Ollie and Zoe

Source: Clarin
In Todos tenemos un plan, the first film he shot in our country, where he grew up as a child, Viggo Mortensen plays two twins, one of which is married to Soledad Villamil´s character. 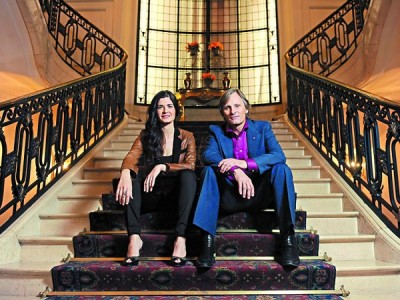 © Clarin.
"I always dreamt of shooting in Argentina. Since I´ve began acting, long before returning to the country after living 25 years out of it, I wanted to return to make a film," says Viggo Mortensen, thrilled about Todos tenemos un plan, the first national film played by the Lord of the Rings star, who grew up in Argentina between ages 3 and 11.This debut as a filmmaker by Ana Piterbarg, that premieres today, is a dark thriller about a man that goes back to the Tigre Delta, the land of his childhood, to pass himself off as his recently deceased twin brother and ends up getting involved in a dark plot of kidnapping, extortion and death.

"The main character lives through a process opposite to that of the first Cronenberg films I made. But he becomes, as well, a third person who has nothing to do with who he was or with his brother. Suddenly he comes to terms with where he is, he likes the place and he doesn´t care whether he is called Pedro or Agustín. I had never played two characters. It was a challenge. In the film, they all lie to protect themselves. They all have a plan, but nothing turns out as planned," discloses Viggo who is supported in the film by Soledad Villamil, Sofía Gala Castiglione and Daniel Fanego.

Villamil remembers how she got to know she was going to work with Viggo. "Ana said to me `Do you know who is playing Pedro and Agustín?´´ and it surprised me. I didn´t expect it and I was delighted. It made it more exciting because I admire him very much," she recalls. And Mortensen answers with praise. "The same happened to me with Soledad. I love her as an actress and it made me feel easy that we were going to work with the same production team that El secreto de sus ojos had."

Todos tenemos un plan is the third consecutive national premiere of great importance that aims for an adult audience, after Dos más dos, with Adrián Suar, and ¡Atraco! with Guillermo Francella. And a certain responsibility can be attributed to El secreto de sus ojos for this recent change in the film industry.

"El secreto de sus ojos is a result of the changes experienced by the Argentinian cinema . Cinema is not learned through theory, but, like craft by making films. That´s how that one and other films that had relevance these past years came out. When I began studying theatre, my friends would enrol in Manuel Antín´s school or in Enerc. And, in time, all of that flourished," says Villamil.

Viggo reflects: "Unlike Hollywood, it´s important that there is an institutional contribution to help cinema. There are cultural changes that make the shooting different, but in practice, at the moment of making films, there aren´t many differences. What would happen to Argentinian cinema if Macri should win in 2015? Maybe it would remain the same. I´m not saying, 'You have to vote for so and so for the cinema.' Those are things that happen and are justified. Sometime cuts are needed, but you have to see where those cuts are going. I´d shoot in Argentina again. I´m in the project of Lisandro Alonso´s next film (La libertad) that will be filmed one part here and the other in Denmark. It´s in Danish. It´s like an experiment. With Lisandro, you never know how everything on the screen will end up," previews the actor.

"I've always liked French and Argentinian cinema, but it was special for me every time I heard the accent of the country where I grew up. That made me more interested in Argentinian cinema than, for example, the cinema of Luis Buñuel in Mexico. I wanted to make a film in Castilian Spanish and was able to film Alatriste in Spain. And now at last I've gotten to make a film here. I had other opportunities, but they always got hold of me when I was working or I didn't like the script much. There aren't that many good scripts, and as long as I find work and don't lack money, I'm never going to make a film, not in Argentina, or in Poland, not anywhere, if I don't like the story," says Viggo, puffing out his chest.

On that spot, the actor shows off a San Lorenzo pin that matches the tone of his azulgrana clothing to perfection. His passion for the club, which is also related to his debut in Argentinian cinema, is well known. "When Ana gave me the script, it made me curious because it was an Argentinian project and she seemed nice. It had such a good structure that I couldn't stop until I finished it. Right then and there I knew that I was going to make this film," he remembers.

But Viggo doesn´t feel that things are so clear in his beloved club. "The future of San Lorenzo is as uncertain as yours or mine," he says forebodingly. And he´s aware of the delicate situation: "We are close to being demoted, but there are a lot of teams that are not doing well. And in Spain it looks as if everything is all right, but the majority of teams are close to the edge economically..." Viggo´s sharp pen can be read online in his column for the club, where he made charges against the coach Ricardo Caruso Lombardi. "I never thought I´d write a column. I asked if I could write about anything and they said yes; then I accepted because I wanted to talk about life, about literature, about cinema, about many things, and not only soccer. Although some heavy things have appeared of late."

Mortensen prefers not to get into disputes and when he's asked if he would get involved in the politics of the club like Marcelo Tinelli, he immediately seeks to distance himself. "I wouldn't interfere because I prefer to be free and not be used. Since the elections are coming, I've avoided having photos taken of me these days because I know that they could be used to give the impression that I support some group. I help San Lorenzo with what I can. I participated in the purchase of several properties trying to make the return to Boedo happen, which seemed like a very crazy thing and today maybe not so much. Will it happen during my lifetime? I don't know. But I'm going to do what is possible," Viggo confided.

Villamil intervenes and brings up another incipient local project of Mortensen's: "At a party, some boys who were making a documentary about the return to Boedo came up to talk to me in order to contact you. Did they meet with you?" Viggo nods and confesses his porteña mania: "Every time I land in Buenos Aires, from the first time in '95, I ask the taxi driver or whoever is going to pick me up if he can't take me to where the Gasómetro was on Avenida La Plata It doesn't matter what time it is. I get out at the headquarters, walk from one end of Carrefour to the other and check whether it's about to fall down," he reveals amongst laughter. "Recently I only feel that I've landed in Buenos Aires when I can have a coffee in a bar near there. After that, I can deal with all the other stuff," he says getting excited. And immediately looks around and asks, "Have I behaved? I haven't talked about San Lorenzo too much, right?"