"They brand me as a traitor, a communist"

By Juan Manuel Dominguez - translated by Ollie, Rio and Zoe

Source: Perfil
The actor promotes Todos tenemos un plan, talks about Hollywood and its rules on beauty, and about Obama. He criticises the Batman saga, praises Cronenberg and supports Tinelli in San Lorenzo. 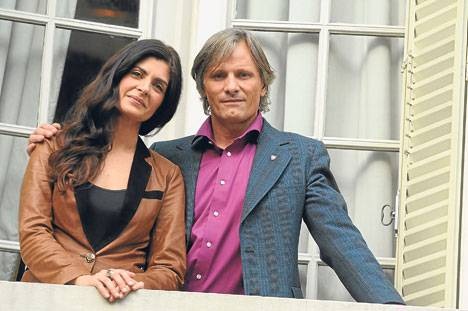 © Perfil.
An old article about the actor with the super heroic chin says it perfectly: before becoming a star (that is, before The Lord of the Rings, the role that his son Henry forced him to accept, would make him a name in the Hollywood "A List"), he already was a man. Working in furniture removal at one time, as a street flower seller and even as a worker in a metallurgical plant, the globetrotter and multifaceted artist (poet, musician, photographer), Mortensen, born in New York in 1958 and raised, as is known, in Argentina, Venezuela and Denmark, is today a world-wide, vital name in acting (and not only because of his close relationship with David Cronenberg, with whom he's made three films in the past few years.) The man, partner of Spanish actress Ariadna Gil, is different to the point of doing the unthinkable, and this has nothing to do with his fanaticism for San Lorenzo, which could take him to jail. Against every rule in the Hollywood handbook, Mortensen shot in Argentina the first film by Ana Piterbarg (who brought the script to the actor at the door of the San Lorenzo club) that will premiere next Thursday and where Mortensen plays alongside Soledad Villamil and Sofía Gala.

You choose to film a first work in Argentina That´s not what´s expected from a Hollywood star.

It shouldn´t be, but that´s the way it is. What´s expected of a star is very limited. I look for stories that I like. There are films that paid me better than others, and that´s generated a little money for me which permits me to keep my dignity. But when cash runs out, you have to go out to find what you can. I look for new things. I have nothing against a big production, if it´s worth it: it's happened that I have to promote it sometimes for months and on top of that, knowing that it's bad.

Does saying no in Hollywood have a price?

Yes, of course there´s a price. People forget you quickly. They still offer me things from there, but one´s profile lasts less than you'd think. You are fashionable. Like clothes, like music. If you´re not active and don´t do interviews, you disappear.

But films like Todos tenemos un plan or Cronenberg's don't stand much of a chance against superhero movies at the box office.

Those films bore me. Cronenberg, in fact, recently got into a controversy about that. They took him out of context, but I understand what he meant. And I agree. Totally. He didn't say that a film based on a comic bores him, but that the infantilization of cinema bores him. And I must say that as fun, creative and artistic as Christopher Nolan's Batman series can be, it reaches a point - even in the second one, The Joker one, I like how that one is acted and filmed - where the explosions, the car accidents bore me. Like a casino, it's boring. Nolan has been and continues to be a great director, but as an adult, I'm bored.

Yes, I would like very much to work with Nolan. In fact, at one time, they offered me the role that Liam Neeson did in the saga. But, going back to the other thing, the subject of how films are shown is absurd. You have to be lucky. For example, me with The Road, the Cormac McCarthy adaptation, I very much fault the Weinstein distribution. The film came out without promotion; they put money into films that had a chance to be nominated for the Oscar. A year later, they say to you, "How strange that it wasn't nominated." Oscar nominations are a business. It's absurd, but it has a lot of economic importance. I saw that happen with Cronenberg; it could happen to anyone.

Once you got angry because they digitally manipulated your face on the poster for A History of Violence. Does Hollywood and its idea of beauty make you mad?

They did it in Hollywood but they hadn't done it in Europe! It's something typical of the United States. We were in Cannes and I saw on the poster for A History of Violence a twenty year old guy, who looked like a kid. It's a little strange the subject of beauty for sale, getting rid of wrinkles, forcing youth. "That wasn't reality," I said to those who flattered me. There's a happy medium; it doesn't have to be like that. Finally, they changed it. It's a terrible way to think about beauty.

Aren't you an activist democrat anymore?

I am, but the Democratic Party of today in the United States isn't very different from the Republican one, unfortunately. I knew, from the people that Obama chose for his government, especially in their ties to Wall Street and the military-industrial complex, that policy wasn't going to change much with respect to international relations, that it wasn't going to be different from that of Bush, Clinton, Reagan. Not just regarding Israel and the Arab countries, but also with South America and Central America. You can disagree with measures in democratic countries like Bolivia or Venezuela, like media censorship (it seems like a mistake to me, just as it was and continues being in Cuba), since I think it doesn't lead anywhere. But one has to fight to be free from the foreign policy of the United States. I understand that.

Does that way of saying things create problems for you?

They brand me as a traitor, a communist. When Iraq was invaded, they asked me and I said what I thought. They compared The Lord of the Rings with a fable of the United States against the world, and I said no. They told me, "Go to France; you were raised in Argentina and you have family in Denmark." As if that mattered. We're human beings. In soccer, there are people who fight, who tell you how to screw others, and I say no: I can continue to be just as passionate, but do it in another way.

Tinelli as president of San Lorenzo, or not?

Right now, he isn't a member of the board. He wants to be vice president and he'll probably win. It seems to me that it's good for him to be in that place, that he would have chosen that, since he's taking on responsibilities. If you buy a player and he does well, you have to take care of him and make sure he stays. And that's taking on a responsibility for San Lorenzo. You're not free.