Why Kristen Stewart Slashed Her $20 Million Paycheck, Plus More Making 'On the Road' Stories

Source: The Hollywood Reporter
Marlon Brando turned it down, Mexican drug wars nearly derailed it, and Francis Ford Coppola never got to direct it - but the Twilight superstar trimmed her fee to less than $200K for director Walter Salles, and Jack Kerouac's beat-generation novel finally made it to the screen. 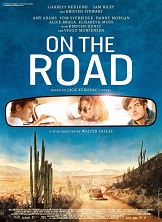 © MK2 Productions.
On the Road began its troubled progression to film with an unanswered prayer to Marlon Brando. "Dear Marlon," wrote Beat novelist Jack Kerouac in a 1957 letter, "I'm praying that you'll buy On the Road and make a movie of it. Don't worry about structure; I know how to compress and rearrange the plot a bit ... making it into one all-inclusive trip instead of the several voyages coast-to-coast in the book." He added: "You play Dean, and I'll play Sal. ... Come on now, Marlon, put up your dukes and write!"

Fifty-one years later, at the end of 2008, Walter Salles had his own On the Road dream shattered.

"We were about to be greenlit when the American financial system imploded," says the director. French financier Pathe wanted to drastically cut the $35 million budget for his adaptation of Kerouac's generation-defining novel.

Producer Rebecca Yeldham, who oversaw another road-trip movie with Salles - 2004's The Motorcycle Diaries, about a young Che Guevara's pan-American trek - was devastated when she heard the news. "The movie was so close, and we had this beautiful cast," she says. "We were doing everything we could to reduce costs and retain Walter's vision, but we realized we weren't on the same page [as Pathe]. It was a very deflating moment."

"It was a question of integrity," insists the director. "We couldn't responsibly do the film."

More than a half-century after Kerouac wrote Brando, three decades after producer Francis Ford Coppola bought the rights and four years after Salles became attached, one of the longest-gestating pictures in history was dead.

Or so Salles thought. With the kind of luck almost every indie needs, the director was in Paris discussing other potential movies with Nathanael Karmitz and Charles Gillibert of MK2 Productions when they asked if he had any passion projects. Well, yes, he said, Sur La Route. Karmitz and Gillibert's response: "Let's do it."

Talks commenced, and exactly two years ago at Cannes, Salles got his greenlight. But that "yes" didn't make it easy. It took herculean effort to reduce the budget to the mid-$20 million range, the minimum Salles thought would work.

Then he had to persuade the cast he'd selected in 2007 to stay on board. Britain's Sam Riley (Control) was all in to play Kerouac's alter ego, the writer-protagonist Sal Paradise, whose multiple journeys with Dean Moriarty across America formed the spine of the book. Garrett Hedlund (Tron: Legacy) was so devoted to the project after he was chosen to play the wild, untrammeled Moriarty that he refused to take potentially conflicting jobs for two years while financing was secured. (Other actors mentioned for male roles through the years included Matthew McConaughey, Russell Crowe, Jake Gyllenhaal, James Franco and Josh Hartnett. After he abandoned playing the part himself, Kerouac envisioned Frank Sinatra as Sal.)

"'Look no further,' " Salles remembers the Babel director telling him. "'I've just seen the first cut of Sean Penn's Into the Wild, and there's this 16-year-old girl you'll fall in love with.'" But once she became a star of the blockbuster Twilight franchise, much maneuvering was required to accommodate her schedule. It was critical that filming on Road end before October 2010, when shooting needed to start on Breaking Dawn - Parts 1 and 2. To Salles' relief, Stewart remained committed to the role for which she received about one-hundredth of her $20 million salary for Breaking Dawn - Part 2.

"There is something scary and unpredictable and animalistic about Marylou," she explains about her attraction to the character.

When On the Road debuts in May at Cannes, audiences will see whether the film warrants these years of effort. They also will see whether Stewart, 22 (whose Twilight co-star Robert Pattinson is in Cannes, too, with Cosmopolis), has the chops to create a post-vampire career. And they will see whether Salles, 56, can repeat the success of his most recent Cannes triumph, Motorcycle Diaries.

Warner Bros. was the first studio to try to make On the Road, offering Kerouac $110,000 to option the novel. Much to his chagrin, his agent, Sterling Lord, turned it down, hoping for more money, which never materialized.

"For years, nothing happened," says Kerouac's former girlfriend Joyce Johnson, author of the upcoming The Voice Is All: The Lonely Victory of Jack Kerouac. She notes that Kerouac wrote screenplays (Pull My Daisy) as well as script coverage for film companies, but he never adapted Road. The writer died broke in 1969.

Not until September 1978 were the Road rights bought by Coppola, at the height of his power after the first two Godfather films. Under Coppola, the book underwent more than eight adaptations by eminent writers such as Michael Herr (Full Metal Jacket), Barry Gifford (Lost Highway) and Russell Banks (The Sweet Hereafter), along with versions by Coppola and his son Roman. "I never knew how to do it," said Coppola in 2008. He had toyed with the notion of filming Road himself, on 16mm and in black and white, then turned for a time to director Joel Schumacher (The Phantom of the Opera).

Finally, after the release of Motorcycle Diaries, Salles was invited to Coppola's vineyard in Napa Valley, Calif., to discuss the project. It was extraordinary for a man who had begun his career making documentaries about filmmakers such as Federico Fellini and Akira Kurosawa to find himself in an intense On the Road conversation as Coppola fixed him dinner.

Salles was struck by "the utter brilliance of Coppola's mind, his capacity to cut corners and go directly to the points that mattered." He accepted Salles' primary request: that, as a Brazilian unfamiliar with the American heartland, Salles should helm a documentary about Kerouac's book before commencing the feature.

"He immediately understood that making Searching for On the Road was necessary for me to grasp the complexity of the jazz-infused prose and the sociopolitical climate that informed the period," says Salles.

Soon, the filmmaker, who first read the novel at age 18 while a student in Rio de Janeiro - tearing through the samizdat after the book was banned by Brazil's military dictatorship - embarked on a road trip of his own. He drove "thousands of miles, for months and months," hunting down the Kerouac locales and meeting real-life figures on whom the book's characters were based. Among them were Carolyn Cassady (wife of Neal Cassady, the inspiration for Moriarty) and Al Hinkle (the model for Sal's friend Ed Dunkel). Salles also filmed beat aficionados Johnny Depp, Gore Vidal and Wim Wenders, all of whom will appear in his yet-to-be-completed documentary.

At times, Salles was joined by Motorcycle Diaries screenwriter Jose Rivera, who had the daunting task of compressing Kerouac's meandering tale with dozens of encounters into a manageable script. Rivera spent six months reading before tackling the screenplay, writing about 20 drafts. "The main difference between the scripts I wrote and those written prior was that I based my screenplay not entirely on the published book but on the scroll," he says, describing Kerouac's original manuscript famously typed on a 120-foot roll of paper (he typed 100 words a minute and didn't want to take time to change sheets).

This gave him a structure the book sorely lacked, though his initial lean approach shifted under the influence of Roman Coppola, who asked to include elements Rivera had discarded - like Sal's romance with a migrant Mexican woman, Terry (Alice Braga).

Notes Rivera, who drew on poet Allen Ginsberg's correspondence: "There was also a moment in an early draft where Ginsberg [the inspiration for the book's Carlo Marx] has oral sex with Kerouac. The Coppolas weren't comfortable with that."

After his forced haitus, Salles decided to put the cast - which grew to include Amy Adams, Kirsten Dunst, Viggo Mortensen, Elisabeth Moss and Steve Buscemi - through an intensive four-week "beatnik boot camp," which got under way before production proper began in Montreal, where some of the New York scenes were shot.

"Neal Cassady's son, John, came to talk, and so did LuAnne Henderson's daughter," explains Salles. (LuAnne is the inspiration for Marylou.) He also screened favorite films including Jean-Luc Godard's Breathless and John Cassavetes' Shadows to give an idea of the freewheeling feature he envisioned and even had Riley learn to type, "which was difficult because I am dyslexic," says the actor.

An 80-day shoot across Canada, Mexico, Argentina, Louisiana, Arizona and San Francisco began in Montreal on Aug. 4, 2010, with the funeral of Sal's father. Everything went wrong: The heavens opened, and rain bucketed down. "I thought, 'Maybe it's not meant to be,' " says producer Yeldham.

Then, gloriously, the light changed in the afternoon and cinematographer Eric Gautier yelled to go. "Some of the best moments in the movie were ones where things went wrong," reflects Riley. It happened again with one scene shot in Mexico, "where I drive the car to this house to get marijuana, and the engine just blew up. That's in the finished film."

But the deteriorating drug situation in Mexico posed a special threat. "We consulted with security experts, who counseled us strongly to get out of there," says Yeldham. The dangers forced a last-minute location shift from Torreon in the Mexican interior to Arizona.

Stewart's fame also required special care. "Wherever Kristen went, the blogosphere lit up with the specifics of her movements," adds Yeldham. Her topless scenes with Riley were shot on a closely guarded set to avoid paparazzi and fans.

The pressure of doing the scenes made Riley "sick with anxiety" - but not Stewart. "I was so shocked at being able to do it," she says. "I didn't feel naked."

Knowing Mortensen (as the William S. Burroughs-inspired Old Bull Lee) was well read, Riley was "terrified during improvisation that he might ask me something about Nietzsche, like, 'What do you think about the Ubermensch?' The night before he arrived, I spent hours Wikipedia-ing Jean-Paul Sartre and others just in case he threw me a curveball." (He didn't.)

For Hedlund, one of the toughest moments came when Salles flew a skeletal team to Argentina to capture a real-life blizzard, and he had to drive while sticking his head out the window. "It was freezing, and I couldn't see a thing," says the actor.

Adds Stewart: "We never stopped shooting. They could have made a 20-hour movie."

The final version is a little more than two hours. In reducing its length, Salles had to lose several darlings, including scenes with the migrant Terry and a sequence where the protagonists stumble on wandering Jesuit hitchhikers.

Hedlund recalls how sad he was to leave everyone just before the wrap party for the premiere of Tron. Remembering his final moments, he cites his character's beloved Marcel Proust and his sad "farewells exchanged beneath an unfamiliar lamp."