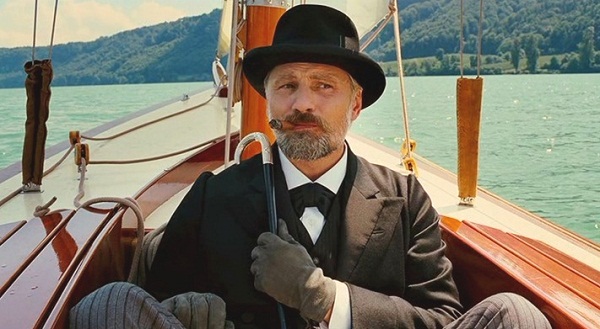 © Hanway/Lago.
What does an actor do when offered the chance to play Sigmund Freud? If you're Viggo Mortensen, and the person doing the offering is long-time collaborator David Cronenberg, you consider the opportunity very carefully.

"(I was) kind of surprised (by the offer), even coming from David, but coming from David, of course, you take it, or I do anyway, more seriously than from someone else. There must be something to it. He's generally respected for being very good at casting his movies. He doesn't take that lightly. The last thing he wants to do is have a pivotal role in his movie be miscast," Mortensen said. "So he thought it was the right idea. I figured there must be something to it."

The resulting film is A Dangerous Method, the third collaboration between Mortensen and the Canadian auteur after A History of Violence (2005) and Eastern Promises (2007), which earned Mortensen an Academy Award nomination for Best Actor. Released by Sony Pictures Classics, the film currently is playing in limited release and is scheduled to open in our area on Friday.

Set in the early years of the 20th century, Cronenberg's film centers on Dr. Carl Jung (Michael Fassbender) and his ever-evolving relationships with Freud (Mortensen) and a patient-turned-analyst, Sabina Spielrein (Keira Knightley).

"I've never worked with a director that had a clearer understanding of the actor's process, who understands how to work with actors and sometimes quite different actors," Mortensen said of Cronenberg while calling from Madrid, where he's starring in Ariel Dorfman's play Purgatorio.

"I mean, the actors that I worked with in (Cronenberg's) movies -- in this movie, Keira Knightley and Michael Fassbender -- worked in quite different ways. (Co-star) Vincent Cassel works in a different way than the other two (Knightley and Fassbender). (A History of Violence actors) William Hurt, Ed Harris, Maria Bello, (Eastern Promises co-star) Armin Mueller-Stahl -- all these people have very different ways of working.

Mortensen also was aided in his portrayal of Freud by spending time filming on location in Vienna, including in Freud's home.

"That was great, and I was able to go (to Vienna) before we started shooting and spend some time there," he recalled. "I found a lot of books we ended up using as library books that, from the research I did, would have been in Freud's library, his personal collection of books, authors from all over, North American, Scandinavian writers, playwrights, poets."

Along with studying up on the literature Freud enjoyed reading in his free time, including the social satires of Mark Twain and Oscar Wilde, Mortensen had to get comfortable with another key component of Freud's character: his ever-present cigars, which the actor can be seen smoking in nearly every one of his scenes in the film.

"Basically the descriptions of (Freud) are of someone who smoked cigars all the time -- 20 or more a day -- and even when he became sick with cancer, he just kept smoking because he loved it," Mortensen said. "He always offered people cigars, and he looked suspiciously on anyone who didn't want a cigar from him at get-togethers or conferences.

"Almost all of the pictures of him, whether he's with a kid or in a professional setting or with his family or taking a walk, there was always a cigar in his mouth or in his hand or in the ashtray in front of him.

"So obviously, David and I agreed he should have one all the time. It was just a question of getting comfortable with it, but like most props, if you make friends with them, they help you out, and the cigars, the way of holding a cigar, the way of smoking it, the way of gesturing with it in your hand, talking with it in your mouth, all of that helped me to round out the character in some way, I suppose."

Mortensen first became known to many film fans thanks to his work in the blockbuster Lord of the Rings trilogy, but he said there are currently no plans for him to reprise his iconic role of Aragorn in the film's two-part in-production prequel, The Hobbit.

"I haven't heard anything yet, so I suspect I'm not going to be in it, but you never know," he said. "As I recall, during The Lord of the Rings, they often came up with ideas and rewrites and so forth and casting ideas at the last minute, and I myself was cast when they were already shooting, I came into that team pretty late in the game back at the end of 1999, so you never know, but I kind of doubt it. I would have heard by now."