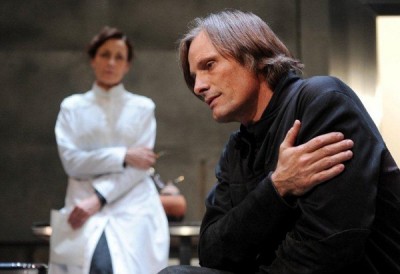 "?when I met [Dorfman] in person, since he's Chilean, we were talking in Spanish and I asked him, out of curiosity, if there was a version in Spanish, and he said, "Well, yes, I have a version. A translation, and furthermore it would be interesting if you'd be interested in doing it, since you're bilingual, if you'd do it, Viggo, in Spanish first and we'll see what happens after that."

"[Dorfman] sent me a version of the play. It's a play that has been evolving. It was performed in a theater workshop, I think in Seattle, in the northwestern United States, for the first time and it's been attempted several times. Ariel says, more or less in jest, that it's a cursed play, that every time he tries to put it on in a, shall we say, legitimate theater, it doesn't work. Someone gets sick, something happens, somebody leaves, and there's been a long journey for us, too, before arriving here."

'[It's] been a tough but rewarding challenge after more than 20 years not doing a play. Tough subject, difficult script to memorize and present.'

What brought you to theatre?

"Fear. I've done theatre because it frightens me. I'm attracted to everything that frightens me. It's not like in film, where you do a take and then you can do another and another. Theatre is just one live take that lasts an hour and 40 minutes, depending on the performance. It's a new adventure every night. If you get off track, you have to see how to get back."

Viggo Mortensen: "I'm attracted to what scares me"
By Roció García - translated by Ollie, Rio and Zoe
El País
24 November 2011

Mr. Mortensen, 52, said that during rehearsals for "Purgatorio" he sometimes thought he "should have picked something easier."

"It's just two characters, and it's an hour and 45 minutes," he said, with no intermission. "Any mistake you make is live, and it can go off the rails," he said. "Also, in the script, there's a lot of repetition and a lot of strange things about time."

"Sometimes, during rehearsals, I have thought that I've been an idiot to get into this theatrical challenge, but then the doubt, the insecurity go away and I keep enjoying what I´m learning from my colleague Carme Elías, and from our director, Josep María Mestres. Ariel Dorfman´s script is demanding, but it´s full of little gifts that keep coming to you to the extent that you are deciphering the text and physically absorbing it."

"I learned more about acting and thinking on your feet in that play than in my last ten or fifteen years in filming," he says, seriously. "There's no saying cut, you just figure it out; it's like an hour and forty minutes long take. I really loved it, loved the connection with the audience."

"?this script is complicated because it's not how people speak. I think that it's just as complicated to seem natural, conversational in a script by Lope de Vega, by Shakespeare. It's complicated! And when you find it, you find the humour in a phrase or in the circumstances, in the moment...Then, yes. Then it begins to be more fun and you begin to understand. During rehearsals, even in some performances, there are moments in which we say, "Ah, that phrase also means this or it could..." Or, last night, we had quite a laugh there. Also, it's also possible...Or, at times, you cry at one point and during another performance, you don't. I don't know, because the thing is alive."

Viggo Mortensen: "Sometimes I have thought that I´ve been an idiot to get into this theatrical challenge"
By Liz Perales - translated by Ollie, Rio and Zoe
El Cultural
31 October 2011

"I find peace in Viggo´s eyes. Confronted with the giddiness of the text, you can take risks with him, walk the tightrope."

"The most interesting part is that you clearly see how, both in our friends' lives and in the lives of people in the public spotlight, in politics, in legend and myth, mistakes and weaknesses always emerge," says Mortensen, and to illustrate it he brings up a fragment of a poem by Leonard Cohen: "There is a crack in everything. That's how the light gets in."

"You have to be honest about weakness and feelings of guilt. The good thing about any creative work, movie, story or poem, is that it asks you questions without asking you to think one way or another, and this play asks whether it is possible to forgive unconditionally, whether there are things that are so hurtful that they cannot be forgiven, and the answer I personally provide is that real forgiveness cannot set any conditions, be they what they may."

"First you need to forgive yourself, then forgive others. Revenge over and over again is a kind of poison, even if saying so is quite justified."

Hi, Viggo. After the polemics that were unleashed , can you better explain your point of view about forgiveness and the victims of ETA?

The problem, as always in some media, is that they don't present a person's response in its entirety. If you listen to everything I said, I'm saying the same thing today: there is nothing that you can't forgive in life. The question is, are we going to do it? Do we feel capable of doing it? Are we disposed to do it? For me, it's undeniable that forgiveness is a positive thing. Only good things can come out of asking for and granting forgiveness.

"True forgiveness is worth it, it clears things up, it cleanses and calms us down. From there on we can advance, grow, in a healthy way."

Yesterday we were at the Matadero watching Purgatorio, Ariel Dorfman's play starring Viggo Mortensen and Carme Elías. We enjoyed it very much. The two actors, towering, in my opinion, remained onstage, alone, without intermissions and with no company or props but a bed, a table and two chairs, for an hour and three quarters. It seems a luxury to me to be able to see a star like Mortensen onstage in Madrid, speaking Spanish (with an Argentinian accent; something that surprised some people, but not me, having already listened to many of his interviews in Spain). Viggo is often criticised for his accents. I don´t agree. He´s an actor capable of changing, not only his tone, but his voice from one film to another, from a film to a stage. If you don´t believe me, listen to the sombre accent they work on in A Dangerous Method. Or the differences between his Alatriste and his Aragorn. It seems incredible to me that the guy I had seen the day before in Freud´s skin in Cronenberg´s flick was the same actor we had less than a metre away (we were in the first row, facing the stage). He looked like another, completely different person. With another voice, other features, other movements...If this is not a huge actor, I don´t know who could be.

Viggo Mortensen is a better stage than film actor. And not because that medium is bad, but because the nearness of the spectator and the live performance allow one to appreciate more intensely the entire panoply of gestures and intonations that accompany his acting. From the sober, tough, unpleasant, and relentless interrogator of the first act, he transforms himself into the frightened, eager to please, somewhat conceited and competitive man he is in the second, when the roles change and he turns into the victim of a tyrant, also played to perfection by Carme Elías, who is at times playful and affectionate, other times inflexible and insensitive.

If Viggo Mortensen seems much more convincing, it´s because, to begin with, he manages to surf over the rhetorical encrustations in the text. It cannot be easy to say naturally things like "When they´ve extracted my true face from my most hidden interior." In his actor´s profile - what a novelty - an extreme sensuality, a latent danger and an intense purity coexist. No actor likes to be compared to others, but he makes me think of a cross between the power of the young Kirk Douglas (chin included) and the innocence of Woody Harrelson or John Savage. There´s a great sobriety in his work, although he, too, overuses gestures to express what he feels. For example, the tendency to hunch to show his fragility and the weight he is carrying looks affected and detracts from the power and the mystery.

The third act, when the cursed lovers meet again, is a beauty. Carme Elías throws herself into the horrifying confession and reaches her emotional height because she captures the duality of this devastated and indomitable woman who wants to begin anew but would return to doing everything she'd done, and Viggo Mortensen is unsurpassable in humanity, contained pain and buried passion.

Here is Elias, one of the great actresses of our stage; I was so close to her this time that, yet again, I was left astounded. The well-known film actor Viggo Mortensen does a magnificent piece of work, which starts from the moment he pretends to be the psychologist. He has a warm voice and a wealth of technique; he takes advantage of his Argentinian speech, especially in this false character, just as he does in the later ones.

How great is Viggo Mortensen?! A couple of weeks ago I was fortunate to be able to see him in the theatre, at El Matadero in Madrid, where he carried it off face to face with Carmen Elías. I had a feeling that Mortensen would have a tough time, because I'd seen Elías many times on stage and she is a real beast. I thought she was going to eat his lunch!

The fact is that Mortensen on film is very good; it's his thing. But let's not kid ourselves...the theatre is another world. It's very difficult. I think that I went because I'd already seen almost all the other shows on right now. But the man holds his own quite well. His propensity for raising his hand as if he were going to thrust a sword at someone, Aragorn style, makes me a little nervous, but otherwise, he does an excellent job.