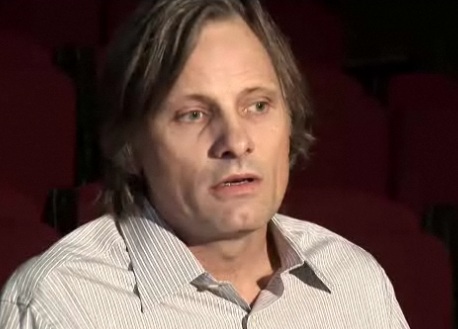 © La Informacion.
The origins of the project

Viggo: Well, as I was saying it's been seven years, I don't remember any more. I didn't know Dorfman; that is, I hadn't met him in person until .. I think it was in 2007, at a festival, another film festival, Toronto I think, but we'd written to each other before. He'd sent me a version of the play. It's a play that has been evolving. It was performed in a theater workshop, I think in Seattle, in the northwestern United States, for the first time and it's been attempted several times. Ariel says, more or less in jest, that it's a cursed play, that every time he tries to put it on in a, shall we say, legitimate theater, it doesn't work. Someone gets sick, something happens, somebody leaves, and there's been a long journey for us, too, before arriving here. But he'd sent me a version of the play, as I was saying, in English. Then when I met him in person, since he's Chilean, we were talking in Spanish and I asked him, out of curiosity, if there was a version in Spanish, and he said, "Well, yes, I have a version. A translation, and furthermore it would be interesting if you'd be interested in doing it, since you're bilingual, if you'd do it, Viggo, in Spanish first and we'll see what happens after that." So then we started working with Josep, and Ariel kept polishing the Spanish translation and the interesting thing is that, well, the differences of language, of the ideas, sometimes, with the translation... He reached a certain point, polishing the play in Spanish, and later went back, has returned, to the English version. To improve it, shall we say. Polish it too. Well .. Why did he think I'd be the actor for the part? I don't know. You'll have to ask him.

Has all this time been useful for you to mull over ideas, nuances - has any new point of view surfaced?

Viggo: Yes, well... On the one hand, as it seems Josep said, at first glance it's pretty complicated. It's a very detailed thing, hard to understand. On the other hand, as you go on working and understanding better what's written, sometimes the thing seems pretty simple. But it's like when you're doing well, or things are going well in a relationship, or like acting itself. I think that acting, when it works, when everything is going well, is the easiest thing in the world, and the most fun. When it doesn't work, it's the most terrible and embarrassing thing there is. I suppose for the director too, right? When something works, it's divine, it's fun, and when relationships work too. But then you wake up next day and, I don't know: your partner left a shoe like this, on its side...I don't know why, but this bothers you and you begin a conversation about that shoe on its side. It's not placed right, or something wasn't dried up or...I don´t know, the dishes weren't washed, I don't know what...A stupid thing, and suddenly not everything is right and you have to begin from scratch. More or less, right? It's never exactly from scratch, but it has something to do with this play and something to do with our process working in it, right? It's very interesting. We are becoming aware about it, and it's true that through these, let's say, two years we've been working with Josep, we've learned things, a lot of things. Even yesterday, the day before. You think you already know what the play is, and suddenly Carme says something in a certain way and I understand it in another way. It's complicated, but it's well written. The structure is very good and makes you think about a lot of things. But it's full of traps. It's not...They are two people who are on stage and don't stop for a moment. They don't stop asking each other questions, interrogating each other. There's no easy way out.

So, conditions can't be placed on forgiveness?

Viggo: It seems to me that you can't place conditions on forgiveness, because if you do that, you aren't sincerely forgiving, right?

Purgatory, for the Catholics, is a state, an undefined place, but it's not hell. Sooner or later, you're going to get to heaven, right? In this play, you are not going to get to heaven. Doing the right thing, asking for forgiveness, forgiving, from the heart, sincerely, doesn't have a reward. It is the reward.

I think that you don't have to believe in God, or in rebirth to think that it's a good idea. Accepting the idea of forgiving without setting conditions, doing it sincerely...Well, you're going to be better off. If you put conditions on it, it's not going to be of much use to you in the end.

There are people that I respect a lot, who are so intelligent, who if you listen to them in a conversation, in a debate, they explain with impressive clarity their reasons for having done what they've done. Ugly things, too. Or their reasons for not being able to forgive an act by another [person], or by another nation or another society. There are things that cannot be forgiven. There are people that say that. I don't know. I think that this play is saying everything can be [forgiven]. You can and should forgive if you want to be well basically.

Why have you chosen the Teatro Español and Madrid for your return to the theatre?

Viggo: Purgatorio is presented in the Naves of the Teatro Español's Matadero because it seemed like a good idea to Mario Gas and his colleagues at the Teatro Español. They liked the play; they liked the idea of presenting it here. And Ariel Dorfman also liked it a lot that his play would be presented for the first time in Spanish at the Teatro Español. And it seems to me like a very good place for the play, The Matadero...Whoever goes to see the play will see that it fits very well with what this play is, that it's visually quite austere. Although, as we say, quite complicated, the text, the ideas, but it's a perfect place for the play. We were very lucky that Mario Gas and the Teatro Español wanted to present it here.

And now we're in the final stages of the rehearsals, and as my companions, the director and Carme, my cast partner, know... and I think it happens with her too, I don't know... There are times when everything seems impossible, and I suppose it's a thing that's like this in theater, it's like this in film too, up to a certain point, that at the moment where it seems to you that everything is good or that you've solved it, then there's another take (in film), and another performance, and no. You have to pay attention. You have to be in the moment, and this play deals with that a lot.