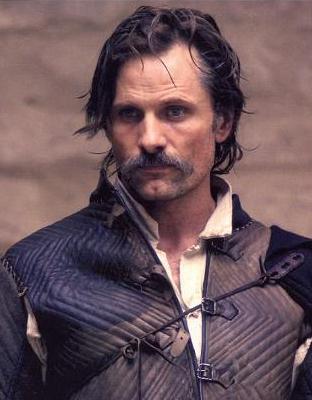 © Estudios Piccaso / Origen Producciones.
How many peculiar things would one need to add to Viggo Mortensen's face before he ceases to be hot? - Ryan Adams, Awards Daily

Are you are aware of being very seductive?

Only when I get into a character. And only if I believe in it myself.

Viggo Mortensen visited the Coolidge Corner Theatre yesterday to receive the 2012 Coolidge Award, which honors a film artist whose work "advances the spirit of original and challenging cinema." I would have just given him an award for being a total hot piece, but whatever.

Me: We have to talk about women, because you are the sexiest man alive.

Him: So there are a lot of dead men who are sexier?

'The one who is really happy about it is my mother.'

Mortensen--who, in playing heroes light and dark, has effortlessly come to embody the best of Us--is soft spoken, loyal to a fault, brainy, literate, artistic, hunky, sensual, athletic and strong; he's the ultimate ideal of what a male heterosexual should be. The ladies and the gay men love him and pretty much everyone else does, too. I bet the guy even turns off his cell phone in movie theatres.

On the contrary! Each time I have tried to charm them with my poetic cowboy side, it's ended in total failure. To seduce a woman, food is more effective than poetry. I love to make complex dishes. That always works!

I'm a middle-aged father of two and I'm sitting in Wellington's Duxton Hotel eyeing Viggo Mortensen's bum. If a man's wife tells him often enough what a privilege it is to meet Mortensen, what physical perfection he is, what a sex god, this is what happens.

Barefoot and clad in a pair of sweats that have seen better days, Viggo Mortensen walks over to introduce himself. His hands and arms are covered with names and phone numbers he has scribbled on himself after checking his answering machine. And his hair is tousled and flecked with tiny bits of paint. None of this can hide Mortensen's deadly good looks.

That is one of the strange aspects of my life. Well, my mother likes to read it.

"I guess they're not going to sell magazines by doing Manchester's loveliest plumbers, although you could make a case for them I'm sure."

'If I were walking down the street without being famous, I assure you that nobody would turn and look.'

Viggo Mortensen is a serious and impassioned actor whose apparent severity extends to his Nordic features: he has hard blue eyes, and a pair of cheekbones that could double as bookshelves.

Though blond and chiselled, Mortensen isn't your typical Hollywood actor. His intense features and sly eyes convey an edge that eludes your Brads, Leonardos and Matts. The actor also exudes intelligence, whether he's playing a magnetically sadistic Navy SEALS officer in "G.I. Jane" or a genteel suitor in "The Portrait of a Lady."

Sensitive Side of Psycho
by Jae-Ha Kim
Chicago Sun Times, 1998

I am being seduced by royalty. And not your garden variety Windsor, either. Admittedly, he looks more like a gypsy in his earthy tunic repaired to within an inch of its life, his hands and nails bearing the ingrained grit of a farmer. But he's a king all right: the King, the Lord of Men. He is Aragorn, son of Arathorn, and any minute now he's going to reach out one of those taut brown arms, lift me up on his trusty steed and whisk me away from all this...

How many peculiar things would one need to add to Viggo Mortensen's face before he ceases to be hot?

The fiery passion that blazes in his eyes can do what no extra-large popcorn can: sustain a grown woman through six-plus hours of viewing pleasure for the past two years. It has been a torrid, if one-sided, affair, though I suspect many others have fallen for his unwashed charms.

You can have your wee hobbits and wizened wizards. Give me the man who would be king. Rough-hewn Aragorn is as manly as they come as he slays loathsome orcs and woos elf princess Arwen, whispering sweet nothings into her pointy ears.

I'd say that his appearance commands respect and that the most excited of fans would think it twice before throwing him a bra or asking him to sign her skin...And also that....his appeal is inversely proportional to his degree of cleanliness.

"Like the photograph of Hubert, this one of Viggo has never before been published. I was in New York, doing a book that was going to be called "The Beautiful Men." and somebody suggested him. He was totally unknown at the time, and I told him he'd never get anywhere with a name like Viggo Mortensen. But then he started taking off his shirt, and his name no longer mattered."

Ellen Graham, Photographer, on her book "The Bad and the Beautiful'
Town and Country magazine
November 2004

Casually dropping his name into conversations with the girls over the past 48 hours has produced more gasps, heaving bosoms and sighs of jealousy than a Lotto win.

I interviewed Mortensen once before, in a New York hotel suite. I was successful in not being reduced to jellied awe before his sculpted visage. Imagine if Norse gods (his father is Danish) had spawned a surfer dude.

....even sitting in a plastic chair under the unflattering glare of fluorescent, in a drab office at Miramar Productions' headquarters in New Zealand, Viggo Mortensen is by far the dishiest bloke ever to have donned a crown.

He has that incurable, unbearable, enigmatic eroticism of a three in the morning dream you've just awakened from.

He's 45, effortlessly masculine, strikingly attractive and seemingly oblivious to this fact. "I'm not that involved in personal grooming," he says. "But I try not to be offensive to people."

When Star asked the actor what he makes of being called a sex symbol, he joked, "I think you should ask Orlando Bloom that question!" Mortensen, it seems, considers himself more geeky than sexy: "They call me the 'Dork of New York'," he says.

'I have just left the Ryerson Theatre, where I fear I have contracted a serious case of Viggomania -- a condition characterized by fever, light-headedness, and general idiocy when Ultimate Man Viggo Mortensen is in the vicinity.'

'Viggo! Viggo! I chant in my head, my heart racing faster, fever burning, face flushed with anticipation. Then it dawns on me. I'm a freakin' journalist, for Chrissakes...

If you're a woman you will remember the way he slid his hands backward over her cheeks as they made love in his grimy loft.

Q: What do you think makes you sexy?

VM: I don't really know how to deal with that question. I'm sure that there's just as many people who think I'm a grizzled hack.