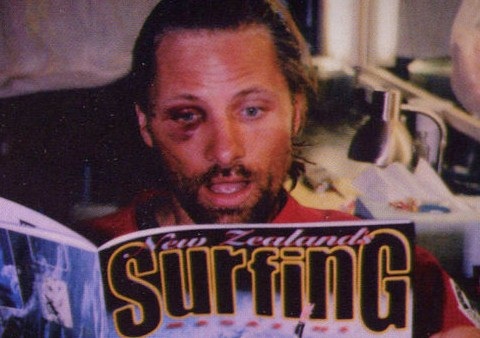 © New Line Productions Inc.
"I'm hoping to shoot a movie with an elephant soon, and I've no idea where I'm going to put him." - Viggo on buying horses from his films

"It's not lawn clippings, I promise."

...he stashes chocolate on his person like a marsupial...

"I'm hoping to shoot a movie with an elephant soon, and I've no idea where I'm going to put him."

Viggo about buying horses from his films
Long Live the King
By Paul Byrne
Wow.ie
April 2004

What single thing would improve the quality of your life?

When I ask him for his favourite joke he responds with a rare one-word answer:
"Me".

...there's a good chance Mortensen has the smallest shoe collection in Hollywood.

I am not sure whether he handwrapped them himself or whether they came from a hand-wrapped chocolate shop. I imagine him travelling the world with a suitcase of wrapped chocolates.

You're a painter, a musician, a photographer, an actor, a poet and you're a natural at swordplay. Is there anything you won't try at least once?

You know what? I'm not so interested in skydiving. I'm not sure why anyone wants to jump out of a plane that's working perfectly well.

If you were a member of a tribe, what would be your special role in it, and why?

I am a member of a tribe, and am happy with my role, which is to mind the fire.

There's a UN patch on his sweatshirt and if you ask him where he's based, he says, hippyishly, "Planet Earth, mostly."

'My mother is very happy about it'
By Harriet Lane
The Guardian
February 22, 2008

Mortensen arrives at the Stephen Cohen Gallery caked in mud, having just been riding T.J., who plays the title role in Hidalgo ....and then washing him and giving him a conditioning treatment. "We don't do that all the time," Mortensen says. "He's not a pretty-boy horse."

Why, it's Aragorn Powers: International Middle-Earth Man of Mystery!

I order a margarita. He orders a whiskey and a beer. The waiter sees a notepad on the table and his celebrity antennae pop up like Ray Walston's extraterrestrial ones in My Favorite Martian.

"So just who is interviewing who?" the waiter asks us. This is a formality. He's pretty sure that this is the guy from The Lord of the Rings. I start to reply, but Mortensen holds up his hand. "She has just set the world record for the longest distance windsurfed by a human being," he says, tilting his head in my direction.

"She windsurfed from Hawaii to the mainland," he continues. "Sure, there was a boat that followed her, and she slept at night, but still. That's what, how many miles?" He looks at me.

"Um, thirty-seven hundred?" I say. I have no idea.

"And not even a man has done that yet," Mortensen tells the waiter. "Isn't that cool?"

Corey, Triple M, Melbourne: Viggo you're now at the stage where you could get the majority of roles you wanted. You've had love scenes with Gwyneth Paltrow and now Liv Tyler. Is there anyone you aspire to have a love scene with, in the world?

Viggo: Gimli? That was cut from the movie - maybe it'll be in the extended version.

"Last month I bumped into Orlando Bloom in a Los Angeles club, 'Now where are you off to, Viggo?'. 'Mexico, Chile and Argentina.' 'Argentina?! It's so beautiful,' he cried, 'You were holding out on me! It has the most beautiful women on the planet. The city center is a jewel,' he exclaimed!

'You see that you should listen when I speak, elf?' I replied."

Viggo Mortensen
"Now Even My Son Wants To Get To Know Argentina"
Translated for V-W- by Margarita
Gente, 3 April 2007

PA: If you were a flower, viggo, what kind would you be?

'...they're terrible at writing, but I look forward to seeing them soon.'

I have to tell you...what an awful combination it is to have a US passport and a Buenos Aires accent when you arrive at the Chile airport. A pretty long delay... my friends that had Spanish passports had already gone through (customs), and they were waiting... and the guy kept checking, very kindly, but he wasn't letting me go anywhere, and he talks to me in a pretty tortured English, and so I tell him: "I speak Spanish, you can talk to me in Spanish". And so he gave me a long look, and then I realized I had f***** up, really, because the combination of the accent and the passport... I was going straight to jail, or so it looked. And so another customs officer comes and says, "No, no, he is the Lord of the Rings", and so..."Welcome to Chile" and (pam, pam - sound of passport getting stamped) "Here you go...go ahead".

Viggo bursts through the swinging front door of L.A.'s oldest Irish pub around 11.30 in the morning, wearing a faded blue-and-white-striped button-down shirt and no-nonsense gray pants that a plumber might wear to unclog a drain.

Viggo Mortensen's temporary headquarters during the Toronto Film Festival were bare except for one corner, where there was a sculpture assembled from a plastic grocery-store bag draped over a tripod.....While Mortensen used the restroom, I tried to decide if the bag-on-tripod sculpture was a comment on our throwaway culture or a meditation on the relationship between art and reality. Turns out it was his luggage.

"Want to see my luggage?" Mortensen asked, emerging from his hand-washing and following my gaze to the "sculpture." "Let's see what's in here," he added, removing underwear, several T-shirts - one with fishing records on it, another emblazoned with "Bring Our Troops Home" - and a United Nations flag from the bag. "I travel light."

We wander our way to the Japanese garden, where the cherry blossoms bloom and sit on a steep grass bank. As is his wont wherever and whenever possible, Viggo wears no shoes. He spots an oval-headed balding man, with wisps of gray hair, walking with two younger women.

"Is that Arthur Miller?" he whispers. "Wait till we see his face."

"Let's just say it was," Viggo says, and by this I don't think for a moment he is suggesting that we should conspire to lie about it. Just that, with some willpower and a creative refusal to join the dots and draw a line we will no longer be able to cross, we can delay even this small disappointment and keep alive our moment in the park with Arthur Miller a little while longer.

VM: Rabbits sometimes run out in front of your car, right? Well, I hit this rabbit on this lonely road in the South Island and I wanted to make sure it was dead. If it wasn't, I'd put it out of its misery. And it was quite dead, so I thought, 'Well, why waste it?' And so I made a little fire and ate it.

Q: Is this something that you thought Aragorn would have done?

VM: As he was driving down the road and if he hit a rabbit? Yeah, he might. If he was hungry, I guess.

What some might see as LOTR affectation - such as rocking up to interviews barefoot - is actually the real deal. "No, I'm not doing a hobbit thing or a Peter Jackson thing," he told a reporter who queried his lack of footwear. "I'm doing a Viggo Mortensen thing."