Viggo by his Colleagues and Friends 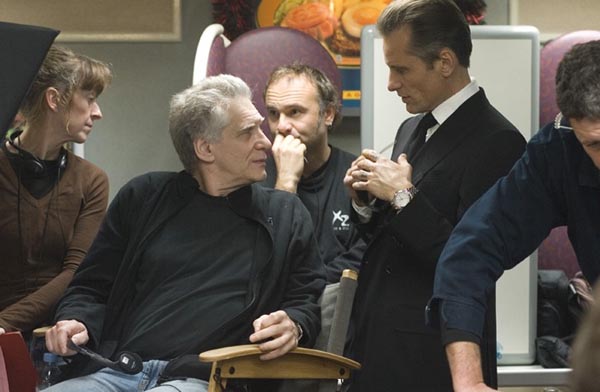 © Focus Features.
Viggo's our king. He's one of my favourite people in life - Elijah Wood


Viggo by his Colleagues and Friends

"I'm really honoured and privileged to introduce to you a man of conviction, of compassion, intelligence, artistic integrity, a great actor and a fine citizen of the world, a man I'm proud to call my friend : Viggo Mortensen."

"The first time I saw Viggo, of course, it was his physical body I noticed first. That was in Witness, by Peter Weir (1985). Since then that image of him has stayed with me whenever I saw him on the screen. I like his voice, erroneously soft, and finally quite provocative, his intelligence, his humour."

"His style, very understated, is the exact opposite of Jack Nicholson, who on the contrary is expansive, and who is rightly thought by many to be a brilliant actor. Viggo holds in his emotions to the maximum possible. But he is no less a great actor."

Getting to know him has been a gift from life. During the shooting of Alatriste, he behaved like a true gentleman; he not only made the movie, but he also did many more things. He is a 100% professional, a superb actor.

"Viggo's a leader, just by sheer dint of his personality. He's an example to us all. He's a massive work-horse, like a massive multiplex. You can go through one door and he's a photographer, then you go through the next door and he's a singer. Then you go and look at his poetry and his art and there's his films! I'm not jealous at all [laughs]. And he's just a great guy and my friend."

LWLies: How would you describe Viggo Mortensen?

Whittaker: A dude. An absolutely brilliant, brilliant guy. He's really soft, he's really generous - in all senses of the word: as an actor, as a human being. I don't know anyone who's met him during filming Good or any of the press we did afterwards that could find anything pretentious or starry in him. He's just a really passionate actor and he's a proper actor, he really works hard and he picks his films. He's not in it for money, he's not in the magazines being papped everywhere, he's a very focused guy and he's incredibly multi-talented, he's got so many side projects that he's involved in, whereas I'm really good at... cooking? I'm rubbish at everything. He's actually a friend, as well, which is lovely, because sometimes you work with people and you really like them, but they're not someone you can easily stay in touch with.

He doesn't need to wield a sword to be recognized. For those who can see beyond that, his personality stands out from the rest with no need of spotlights. He has his own light.

Right now there is a resurgence of the hero but invested with those qualities we are most devoid of. Quite often, most of the time, they are fictional characters that have been wrongly embellished with those things we wanted to see. But at other times, occasionally, the flesh-and-blood hero emerges, stationed on a corner, wandering the streets or simply sharing fragments of his existence. Viggo Mortensen occupies that place of the ultimate present hero.

All great artists reveal themselves more in their work than in interviews. Every time Viggo's in front of the camera or picks up a pen or a canvas or a camera, he's opening the door to his heart. This is where he's telling you the secrets of his life . . . Viggo cannot strike a fake note. I say with absolute experience that if he doesn't believe it, he won't do it.

Philip Ridley, Director
The Reflecting Skin and The Passion of Darkly Noon
The Telegraph

'Viggo is a real artist. He lives for creating art and be absorbed by it - not for talking.'

'He's never different,' the guitarist says. There's a long silence. 'He doesn't seem like he belongs in this time.'

Elijah laughs and concludes, 'Viggo is a wonderful mate. He's an unusual and very special guy, and I admire him because he will never adjust to other people's ideas of how he should be.'

Mortensen has a disposition towards an archaeology of emotions, of things that are buried, weathered but surviving along with the rest of us

'He'll show up at your door barefoot. It's real with him - it's not an affectation. He is very much of the earth. He's relaxed and in the moment and he brings real emotions to the table. He's very human with great artistic sensibilities.'

"He's circumspect around people," says director Tony Goldwyn (A Walk on the Moon). "He has high standards, so he's not Mr. Friendly to everybody. But I think he just tries to be careful, because once he opens up, there's none of the artifice or barriers you find with most people."

...and yet, in his many careers, ego has no place...and if ego has no place in his career, apathy has no place in his life. Viggo Mortensen has earned a reputation for having endless energy, for being consummately curious. He drives himself hard in all aspects of his life... He is a connector, the agent who brings people and ideas and feelings together in ways that transcend customary forms of expression and measures of success. We have known Viggo Mortensen through his work on film, and we have been privileged in recent weeks to know him more fully through his photography and poetry. St. Lawrence University is honored to welcome home from the class of 1980, to share some of his poetry with us, Viggo Mortensen.

"He's being true to himself. And people here are not really used to that or comfortable with that. And I love the fact that, as far as I have been able to see, he has not given away any of his mystery. People want to figure you out so they can move on. But he's the one who moves on." His muse, Lane says, is the tramp. "He can be as debonair as he wants. For that afternoon. But then the tramp will call him again."

"I think he has a quality of self-knowing that challenges everyone that he meets - perhaps unwittingly. But the electrical charge of that challenge of 'How well do you know yourself? Cause I know myself real well.' You know, that's kind of the unspoken Viggo experience. He's also fascinated by other people. And when you combine those elements, it's very charismatic. It can definitely be interpreted as sexy."

"Viggo Mortensen is an extraordinary person...I suspect a defect somewhere. It's not possible, I have never met someone who has no defect. He has all : he is kind, he is generous, he is tender, he is a pacifist, he is tolerant -I'm also tolerant, I like that kind of people- and he helps everybody. He writes poetry, he makes photos...it's extraordinary...he is handsome, he acts well...then we say ourselves it's not possible, people like this do not exist. I did not manage to find it out but there has to be a defect somewhere. One cannot be that perfect ! (laughs)"

"Viggo's our king. He's one of my favourite people in life."

Elijah Wood, who plays the hobbit Frodo in the films, says that Mortensen is one of the strangest and most charismatic people he has ever encountered. "When I first met him, we sat down in this real crusty place, the Green Parrot, and I remember not being able to hold a conversation, because I was so intimidated," Wood says. "There is something beautiful and quiet about Viggo, but the more I got to know him, the more I realized how insanely brilliant and crazy he is - how he has this insane wild side." Like when Mortensen's tooth was knocked out during a scene and he asked to have it put back in with Super Glue. Or when his car hit a rabbit in the road and he decided to roast it and eat it. Or when he slept in his costume for weeks at a time.

'...there are some silly-genes in our family, that he benefits from.'

'Viggo is just the coolest guy,' says Billy Boyd, the Scottish actor who played the hobbit Pippin in Lord Of The Rings. 'It's hard to say too much about how cool he is. If you spend enough time with people they will do something to piss you off, or that shows them to be just a normal human being, but I think Viggo does like to push himself to be just the best person he can, and that comes across. If you believe in reincarnation, he does seem to be quite far along his line. He does seem to have learned a lot of lessons, and seems quite old and wise. But he's not a serious fuddy-duddy. He'll go surfing with us, and he likes to go out at night and have some drinks.'

"Certain people don't have a lazy bone in their body," says his good friend, producer Don Phillips. "Viggo is that kind of person who has to be continually on the move. He may sometimes bitch and moan about it, but he loves being busy."

It's difficult to think that such a popular actor as Viggo Mortensen is, can combine humility, naturalness, sincerity, humanism so well, for these are qualities hardly found in one and the same person.

Wherever there is a noble cause to defend, we see him, and that is not the product of my imagination but of such an obvious and truthful reality that it has a full name. And those who stand involved in these matters of conscience know it perfectly, because he is a hero of our time in the broadest sense of the word, as well as a humanist.