Viggo Mortensen: "When Mourinho speaks, you don't know if he's calculating or crazy."

By Gloria Scola – translated by Ollie, Rio and Zoe 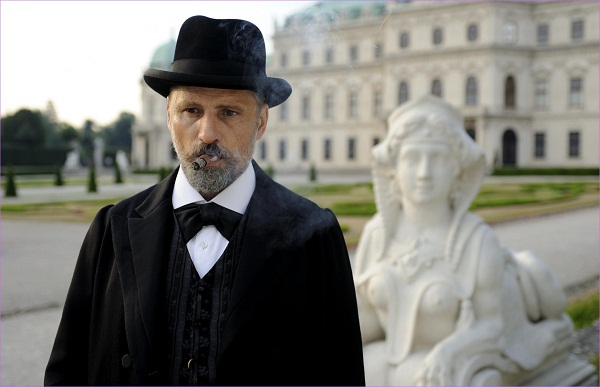 © Hanway/Lago.
Having a chat with Viggo Mortensen [New York, 1958], who amazed [us] in The Lord of the Rings, A History of Violence and Eastern Promises, always ends up being a pleasure. Whether in Spanish - he spent his childhood in Argentina - or in English. On film, soccer or Sigmund Freud (1856-1939), the character that he embodies in A Dangerous Method, from the Canadian David Cronenberg and which has been received in Venice to enthusiastic applause. In a mansion on the Lido in full festival euphoria, with Mortensen, it's a pleasure to be psychoanalyzed.

To play Sigmund Freud in A Dangerous Method, you not only have relied on his correspondence, but also, in addition, filmed in Vienna, at his house.

Yes, and David (Cronenberg), Christopher Hamption (the screenwriter and I were very lucky to have access to that material. Although when Freud left Vienna, he took all of his books and his belongings to England, and now they even have his chair in the Freud Museum in Hampstead. But for me, it was very interesting to be able to walk along the street that he walked and what I liked was doing the scene in which I greet Carl Jung (his student and a psychiatrist, with whom he establishes a friendship and a rivalry in the film) on the same staircase that for decades people walked up.

A lot. I do it every day, and in fact, this morning I got up early to do it when it was still a little fresh and the temperature was pleasant.

Have you ever been psychoanalyzed? Especially having been raised in Argentina.

But I left many years before I could do that (he laughs), although in Argentina, it's a huge thing. In Buenos Aires, it's a constant subject of conversation, and if you haven't been, someone in your family is a therapist. Some twenty years ago, I did go for a short time and it was somewhat similar to what it would have been with Freud. Basically, it's someone listening to you.

And it helped you?

Yes, it helped me to talk with someone who had no emotional involvement with what I was telling him. He simply listened to me, and that turned out to be liberating.

What´s your opinion of the relationship between Freud and Carl Jung?

I think that their ideas were not that different. Jung said, "We are going to cure people." And Freud said, "We are not going to cure them, but at least they are going to be aware of who they are and what is happening to them. This way they will be able to act accordingly later on." They were both trying to make people conscious of their feelings; so the idea of a confession without punishment, of listening, was a way to show you care about someone. When Freud was studying in Paris, someone said to him, "The trick has to do with looking at something a very long time, over and over again, because later on it will begin to tell you something. There are many patients involved and something will speak to you." And Freud described it something like, even when a person says nothing, truth will come out through their fingertips, their skin, therefore you only have to pay attention and listen. In any emotional relationship, be it between father and son, friends or among adults, to listen is our love cure. Jung and Freud were intelligent and their conflicts have more to do with their personal insecurities. I´ve made many other films, including A History of Violence and Eastern Promises, also by David, where communication was expressed more through gestures than words. Here, words are more gestures than physical gestures. There´s physicality in the characters, especially in Keira Knightley´s, and each has their own way of controlling it and looks for a way to do so. I did it walking, copying information, sitting down, smoking cigars....

How do you get along with David Cronenberg?

This movie happened by chance, and I was lucky because Christopher Waltz (Inglourious Basterds, Carnage, also competing in Venice) was going to play Freud and decided to do something else (Water for Elephants) at the last moment. It was a stroke of luck, like with The Lord of the Rings, something unexpected that you do suddenly. I had worked with David twice before, and since we're both on the same page, in the sense that we work the same [way] and have the same sense of humor, it was much easier for him, and I suppose a relief knowing that he didn't have to start to get to know the actor who played one of his principal characters. As for me, I knew that I was in good hands and that I could trust him.

I understand that you're very neat.

Well, I'm very messy in a lot of ways, but there are two things I always do: wash my clothes and wash my dishes, and even though everything might be messy, it's clean.

He must be neater than I am. Do I look like a disaster? The truth is that I wash everything all the time.

I know that you're crazy about soccer and that Argentina's San Lorenzo is your team, but in Spain it's [Real] Madrid.

Of course. Go Madrid! But I have to say that Mourinho is the Otto Gross (a film personality who doesn't rein in his impulses) of the coaches. When he speaks, you don't know what the consequences might be. He says things and you don't know if he's calculating or crazy.