Viggo Mortensen in the Shoes of Dr. Freud

By Nicolas Crousse - translated by Dom

Source: Le Soir
Viggo Mortensen is at the centre of the film A Dangerous Method, about the birth of psychoanalysis and the relationship between Freud and Jung. This is the third time that David Cronenberg has directed him. From our special correspondent at the Venice Festival, Nicolas Crousse. 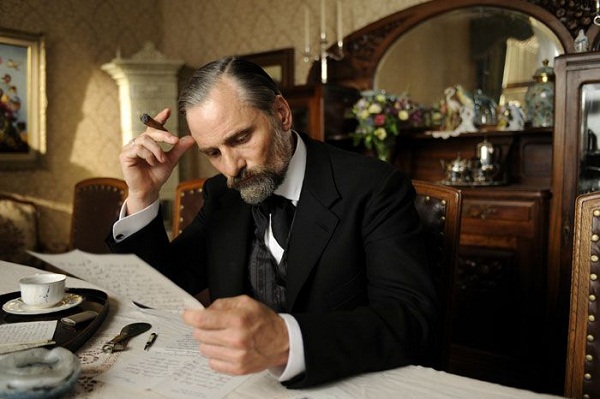 © Hanway/Lago.
Two days earlier, Philip Seymour Hoffman, certainly one of the great actors of our time, told us in a Venetian hallway of the Hotel Excelsior how he regarded Viggo Mortensen as one of the masters of the profession. A point of view that is totally shared. The American actor, tremendous in Sean Penn's The Indian Runner, Peter Jackson's Lord of the Rings and, of course, with Cronenberg, with whom he works for the third time, after A History of Violence and Eastern Promises, is a guy who is intelligent as well as really nice.

In A Dangerous Method, presented this weekend in competition at the high-level Mostra, who praised the films by Marjane Satrapi and Vincent Paronnaud (Chicken with Plums), Steve McQueen (Shame) and Emanuele Crialese (Terraferma) , the citizen who now lives in Madrid puts on Sigmund Freud's suit. Never becoming ridiculous nor discrediting the character. But giving him a fictional depth, while remaining constantly reserved. This is the third time we've met the man. The first was in 2005 at the Ghent Festival. A great moment, coupled with a real encounter. The man has never disappointed us.

Here is his interview.

He has frequently been portrayed in fiction, how would you define "your" Freud?

There is so much to say. He wrote so well. He said for example, "everywhere I go, a poet has been there before me." He was not only a scientist. Not only a good teacher, gifted with a remarkable didactic sense. But also an important man of letters of his time, and who remains so today. His language was beautiful and full of powerful images. He was also a great communicator, understanding the importance of public relations. It was a strange mixture. He had these revolutionary ideas, related to sexuality. And otherwise, at home, he was a very old-fashioned man, living in a luxurious and bourgeois place, dressed rather in the traditional style.

Would you say, with Freud, that everything in life is related to sex?

No, I don't think so. But I think he paid a lot of attention to it because of the time he lived in. Freud grew up in nineteenth century Vienna, and women then were in a social corset, which did not facilitate their fulfilment.

This obsession doesn't it reveal, as suggested in the film by Dr. Otto Gross, the sexual problem ... of Freud?

That's a comic quote in the film. But frankly, I do not know. But after all, he had a big family, so it may mean something.

This is the third film you've shot with David Cronenberg. What is the secret of this artistic association?

He gives you a lot of freedom. While he's very precise. We both maintain a real relationship of trust. Each of his films is very personal. The first five minutes are always disconcerting. One wonders if we'll get in. And then suddenly, without paying attention, we're in! Apparently, this film is more traditional, more formal. This is only an appearance, if you watch it closely. He's an author. He invites you each time to think further. In my previous film with David, it was more the gesture that mattered for my character (Eastern Promises). Here it's the words. The word "is" the body language.

The film emphasizes the fragility that can be established in an analysis between a doctor and patient. And this fragility can contaminate both of them, right?

I think so. Any intimate confession related to feelings and fears is always dangerous. But ideally, psychoanalysis must not have negative consequences, such as this. Facing a deep problem, Jung would propose a healing treatment. Freud would refuse that, but would say that the analysis can help the patient to be more aware and to use this awareness to battle his own neuroses and start to regain control. In short, making peace between desires and controls. The basis of all this is in the speaking and listening. Freud had a scientific approach, Jung was on a more religious, spiritual level.

Correspondence greatly occupied Freud and Jung. One no longer writes many letters today. Do you?

Yes, I still do. And when I do, people are surprised to receive them. It's becoming rare. Almost exotic. But I like it, yes.