By - transcribed/translated by Ollie, Rio and Zoe 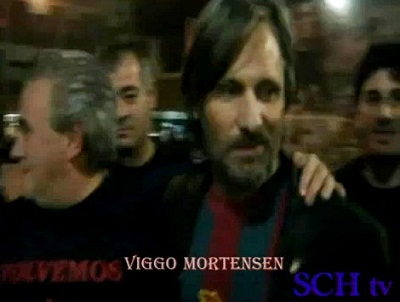 © SCH tv.
Jorge Barros: Here we are, with Viggo Mortensen, the Cuervo ambassador to the world with all the members from the supporters subcommittee. Viggo, how do you feel being here with all the San Lorenzo people, the whole family?

Viggo: Very happy to be here with all of you, with everybody in there [points towards the main room]. A very nice party. As for the return, the return is going back where we were, to the place we never left. So with all the reason in the world, let´s see if we take advantage and the governments of Argentina and Buenos Aires help us a bit, right?

Martin Dianda: Viggo, you collaborated with the first [inaudible]... for the supporters' subcommittee and I'd like to ask how the return to Boedo is being experienced far away.

Viggo: Well, in other places... the Cuervos that I meet around the world are in on this too, and they support you.

Martin Dianda: Thanks to you - they tell you from time to time.

Martin Dianda: You were in Japan, and even there...

Viggo: Yes, the peña* in Tokyo is absolutely insane.

Martin Dianda: The last one, Viggo. What feeling do you have at seeing all the people together? Different political parties, different affinities. Everybody united towards the same end which is to return to Boedo. What do you feel seeing all that? All that together.

Viggo: Very nice. Especially everything you are saying. Also it's good that I don´t see anyone quarrelling and, I don't know, that feeling all the Cuervos have, that´s also anti-violence. It´s pure, pure love. The purest thing there is.

Martin Dianda: We are all Cuervos.

Viggo: Of course! Well, I saw a Bostera** around here and they didn´t treat her badly either.

Martin Dianda: So San Lorenzo was born here. Here it was founded and it´s really important to us... We are grateful to you for being here and because we know how much your name means around the world, and for your unselfish commitment to San Lorenzo. We thank you on behalf of the supporters committee and everybody in San Lorenzo.

Viggo: Well, it´s a pleasure. It's an honour for me. (Kisses everybody)

Peña* - Group of people, usually supporters and members of a soccer or other sports club, that take part together in events they organise. Peñas can also be located in different neighbourhoods, cities or countries. All of them united by a main interest.