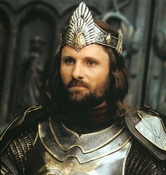 © New Line Productions Inc.
To get the skinny on the final installment of Peter Jackson's Tolkien trilogy, we went straight to the source: Viggo Mortensen, who plays the titular returning royal, King Aragorn. "All I know is what's in the book and what we shot. Judging from these last two movies, nothing Peter does [in the editing room] will be a surprise to me," Mortensen says. A few things we do know: The Return of the King will showcase yet another creepy CGI creature, Shelob, the globulous she-spider, whom Sam (Sean Astin) combats; it'll have the monstrous Battle of the Pelennor Fields, which makes Two Towers' crowning melee look like cute Middle-earth rough-housing. And naturally, Aragorn will assume his rightful place as king. "He's a good candidate [for the crown] because his friendship for the various races of Middle-earth has allowed him throughout the story to look for common ground," Mortensen says of his character. Still, don't look for unicorns and bunnies to frolic joyfully as the credits roll. "Things happen, people die, and there's a darkness," Mortensen says. Okay, but surely there's one more hobbit sing-along!
Top of this page
Last edited: 10 March 2011 08:53:25