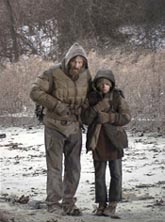 Image Macall Polay.
© 2929/Dimension Films.
The man crouches in a muddy ditch, the muzzle of his revolver pressed into his 11-year-old son's forehead, praying for the courage to pull the trigger if a roving band of cannibals catch up with them.

So, yeah, The Road is not your average holiday family movie. The adaptation of Cormac McCarthy's Pulitzer Prize-winning novel is a bleakly eloquent parable about a father and son living in a devastated world that has no use for humanity. And yet, stubbornly, they try to stay human anyway.

The blockbuster 2012 reveled in showing us the planet erupting in CGI volcanoes and tidal waves, and in contrast, the post-apocalyptic world of The Road seems eerily quiet. We never see the devastation that ended civilization, never even learn whether the disaster was nuclear or biological. All we see is a blasted-out gray landscape of dead trees, rotting buildings and abandoned cars, where nothing grows in the ground and some people have resorted to cannibalism to survive. This isn't a world that's dying; it's already dead.

Traversing this landscape is The Man (Viggo Mortensen) and The Boy (Kodi McPhee), pushing a shopping cart with their belongings in front of them. They're heading for "the coast," trying to outrun the next punishing winter, nurturing a faint hope that things might be better somewhere else.

The journey is incredibly dangerous, with armed bands of flesh-eating killers roaming the forests, preying on the helpless. The man has two bullets left in his gun, one for each of them, and in one of many harrowing scenes tries to teach his son how to commit suicide if the need arises. At one point, they meet a blind old man (Robert Duvall), and the father asks him if he ever wishes he were dead. "Foolish to wish for luxuries in times like these," the old man responds.

But for a movie with such an apocalyptic setting, The Road is a surprisingly poetic and personal movie, focusing on the bond between father and son. In a world where so many are utterly alone, the duo are fiercely devoted to each other, and to the belief that they are still "the good guys" in a world where it makes no sense to be good.

In the end, The Road poses a moral riddle. The man believes he is a good person, but will do anything to protect his son and doesn't trust anyone. The boy, on the other hand, is eager to find good in the world and wants to show mercy to the people they meet, even to a thief who steals their belongings. Is the boy foolish and the man wise? Or is the man afraid, and the boy brave?

Unexpectedly, it was those questions that haunted me after seeing The Road and not the visual house of horrors that the movie presents. Director John Hillcoat (The Proposition) gives us glimpses of the ruined world around him (some scenes were shot in New Orleans' Ninth Ward, where post-Katrina damage still lingered) but he largely avoids big visual effects, instead focusing resolutely on the characters and their quest.

Mortensen and McPhee do a wonderful job as father and son, showing us the flicker of love still burning underneath their daily lives of terror and hardship. Flashbacks featuring Charlize Theron as the boy's mother in happier times at first seem intrusive, but quickly we see their purpose in showing us the magnitude of what the man and the boy have lost. Theron, in a few brief scenes, delivers a dagger-sharp portrait of a woman who completely, utterly loses hope.

The one thing that doesn't quite ring true in The Road is the uplifting ending, which feels just a little too convenient after all the despair that's come before it. Maybe we've spent too long with these characters, trucking through the mud, glancing nervously over our shoulders, to believe that something better is possible. The Road does such a good job of showing us the darkness that we're reluctant to accept the dawn.
Top of this page
Last edited: 15 February 2011 15:17:15