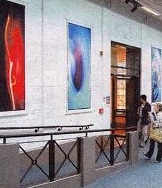 © Ong Sor Fern.
As Aragorn, the fearless warrior of The Lord Of The Rings trilogy, Viggo Mortensen made fanboys cheer as he cut a bloody swathe through hordes of evil orcs. As the angst-ridden hero who romances Liv Tyler's beautiful elf Arwen, he made millions of women swoon.

When The Return Of The King, the third instalment of the much-anticipated Rings trilogy opens tomorrow, the man who would be king will be crowned, once and for all, a bona fide superstar.

In person, however, the soft-spoken 45-year-old gives the distinct impression he would rather not be a star.

Dressed down in a grungy blue T-shirt and jeans topped off with a worn suede coat and sporting bare feet, he is, quite frankly, nondescript in appearance. While he is tall, about 1.8m, he also has a tendency to hunch.

Holding court rather reluctantly, at a press conference in Wellington's Massey University, he sits with both hands clasped between his knees and head lowered almost defensively. He may have faced down rampaging orcs and evil wizards but he confesses: "Answering questions is probably the scariest thing."

Clutching a cup of mate like a lifeline during the 50-minute session, the American son of a Danish father and American mother comes across simply as a really nice guy.

When one of the tape recorders on the table in front of Mortensen stops midway through the press conference he takes the trouble to flip the cassette over. And he cracks a joke as he does so: "Everyone's recorder is stopping now."

He makes an effort to acknowledge each reporter who asks a question. A French reporter is greeted with a "Bonjour" from the man who not only speaks Danish and Spanish fluently but also has a grasp of French, Italian, Norwegian and Swedish. When someone else asks how he juggles his multiple passions of acting, painting, photography and writing, he responds with a joke about the reporter who has identified herself as a representative from the gossipy People magazine. "You don't sound like you're from People magazine or the United States," he observes lightly, to general titters from the crowd. The questioner turns out to be a freelance writer from New Zealand.

The purpose of this meet-the-press session is not the Rings trilogy.

Not that The Return Of The King is likely to need any more publicity, given the phenomenal success of the first two movies. The Two Towers is No. 5 in the all-time global office top 10 movies and The Fellowship Of The Ring made it to No. 7. The two movies combined grossed over US$1.7 billion.

Given the almost guaranteed success of The Return Of The King, it is small wonder that the cast dedicated their efforts to promote various other worthy causes in the mad week preceding the world premiere in Wellington on Dec. 1. British actor Ian McKellen who plays Gandalf, for example, lent his name and presence to a charity event to raise money for the New Zealand Aids Foundation. Actors Billy Boyd and Dominic Monaghan, together with co-stars Elijah Wood, Orlando Bloom and Mortensen, were promoting a programme for people to adopt a Kiwi tree to help save New Zealand's forests.

But Mortensen was the most indefatigable worker.

He took part in a sold-out poetry reading to raise money for a scholarship for creative writing students at Victoria University. The press conference at Massey University is to publicise not one but two exhibitions of his photographs at both Massey and City Gallery in the heart of Wellington's Civic Centre. While the City Gallery exhibit is free, entry to the Massey exhibition is by donation, which will go towards scholarships for its creative arts students. The events, as Mortensen is at pains to repeat, are his small ways of giving back to the New Zealand community.

"What friends do is they share. That's what I thought I'd do, return the favour to benefit Massey and the arts, give Massey an excuse for repainting and refurbishing and making those spaces look as beautiful as they do now," he says softly. "The poetry reading is also a benefit which I'm happy about, because again like the Massey show, it's going to benefit financially the creative writing programme in Victoria."

The fan of poetry accumulated "boxes and boxes" of New Zealand poetry during his 18 months shooting the trilogy in the country. It is evident that he is sincere about promoting the arts. He says of the poetry reading: "It's being able to do an event where relatively new New Zealand poets get a chance to read, not only for New Zealand, but also for visitors from other countries."

His determinedly unassuming stance unnerves some of the hardened journalists. After all, nice makes for boring copy. Some of the reporters resort to making disparaging comments about the man and his works. But Mortensen is no mere dilettante in the arts, having exhibited and published works throughout his career. This explains in part why his screen success has been a long time coming.

In a 14-year acting career, he has made over 30 movies. His debut was in Witness (1985), where director Peter Weir was so impressed by his charisma that he expanded Mortensen's role from a walk-on to a secondary part. With roles as Nicole Kidman's suitor in Portrait Of A Lady (1996), Gwyneth Paltrow's artist lover in A Perfect Murder (1998) and Diane Lane's hippie boyfriend in A Walk On The Moon (1999), Mortensen has always earned favourable reviews and publicity puffs hailing him as Hollywood's next big thing.

But he has never quite caught on, thanks in part to his multiple interests outside of acting.

On the encouragement of actor Dennis Hopper, he began to exhibit his photography, most recently in June at Denmark's prestigious Museet For Fotokunst (Museum For Photography). He spent time pursuing painting seriously after his works were used in A Perfect Murder. He set up Perceval Press in 2002 to promote the publication of art and poetry books.

The devoted father also put family first. He was married for 10 years to Exene Cervenka, lead singer in the seminal Los Angeles punk band X. The duo moved to Idaho to raise their son, Henry, now 15, and returned to Los Angeles only after their divorce in 1997. They now share custody of Henry, who, as a fan of Tolkien, was instrumental in getting his Dad to accept the role of Aragorn. Mortensen was called upon at short notice to take over the role a few days into production after Stuart Townsend was let go for being too young for the role.

Asked whether he would move to New Zealand, Mortensen demurs because of his son. "I have a life with my son who is now a young man almost and that is in the US. That dictates where I can be for the time being," he says.

He is self-effacing about his Renaissance man accomplishments. "It's just what I do, it's the way that I'm comfortable communicating and being present." Photography and writing, he says, help keep him grounded. "Just having my camera in my hands, whether I use it or not, I'm already paying more attention than I would to my surroundings.

"Just that alone is something that makes me happy, makes me feel comfortable and part of the world."

He acknowledges frankly that his fame will probably draw curious fans. "I wouldn't be surprised if 90 per cent of the people will come to these exhibitions because of my being an actor who had the strange luck of being in a popular movie. But it doesn't bother me. It doesn't affect how I took the picture or the pictures I decided to show."

At the very least, he adds, he has managed to draw people into an arts space. "If they're in a room and they're looking at it, that's the main thing, isn't it? They can decide for themselves. If someone else likes it, or gets something from it, or if it makes them want to go see other shows, or take pictures, or buy a book, that's good. More importantly, it gives people a chance to think about something other than movies."

This one reluctant star, it seems, is bound and determined to use his powers for good.