By Sabrina Champenois - translated by Kaijamin 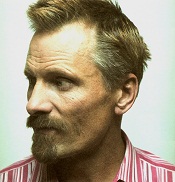 Image Benni Valsonn.
© Libération.
At the media screening of Eastern Promises a colleague form a cultural weekly, is going to stick herself in the front row, writing "I want nothing between Viggo Mortensen and me!". Poor devil. You know. Even in the flesh, just a centimetre away, Viggo Mortensen remains out of reach. This guy quite simply comes from another planet; and when he lands on ours it's like the mark of an irreversible seal. With him, the media leech can always cook, the mystery remains intact. Would be this only for that, thank you Viggo Mortensen.

Not that he is a mutant, restive or enigmatic. As is his habit, Viggo Mortensen arrives in socks, with his small thermos of mate, quietly pushing forward gilded with the fine gold where he endures interviews with a soft voice. From some door, Cronenberg appears in a grey outfit which accentuates his vampire like pallor. Viggo wears an impossible striped red shirt within which he is lost. He puts at his feet a plastic bag from which spews a copy of Monde de la Musique and Anna of all the Russias, a biography of the anti Stalinist Russian poet, Anna Akhmatova. He is thinner than ever, a goatee engulfs his chin dimple and accentuates his blue gaze which at first avoids folk like a black cat. If, once again the women's magazines call him "glamour" he must pursue them for slander.

It's said, Viggo Mortensen will fall. But Viggo Mortensen has never been a bimbo. Viggo Mortensen always emits nobility. In his first lead in Indian Runner, where he blows a fuse on returning from Vietnam, with a body sharp like a dagger and a worrying half smile. But also in several B movies, where he was left in the shadows during the years 1990 -2000. And again in the Lord of the Rings, where he could have put on an act of pedigree in King Aragorn, that kitsch role which made him flavor of the day, past forty. But no. He always plays it understated, cerebral, who short cuts the obvious, that hot as embers physique - Sam Shepherd also has the same thing. And it appears that with age, Viggo Mortensen still shines bright, always defusing this spontaneous sexual charge. When he is left stripped by Cronenberg, it is with nothing to lose but his mystery without leaving himself dispossessed. Anti erotic? Certainly not, if you see the sublime tattoo scene in Eastern Promises where it seems like something out of a Caravaggio painting. Where it's a full on ambush in the sauna. He comments laconically "I couldn't keep a towel on, that wouldn't be realistic. And David could have only filmed below the waist, but it was less powerful". Two years ago in Cannes, at the release of A History of Violence, he declared his passion: "For Cronenberg I would go to the ends of the earth" He endlessly praises "a friend" and a film maker "who continues to try new things when plenty of others after 20 or 30 years are happy in their niche". You could deduce that Mortensen has found his master. But not certain that he exists.

This time he plays Nikolai, a hired man for the Russian mafia in London. For the role he spent a fortnight alone between St Petersburg, Moscow and the Ural mountains. Explanation: "In the U.S. I have encountered Russian immigrants but I have never had the need to see and feel certain things without filtering. The producers weren't thrilled, but I knew nothing would happen to me" he speaks of being able to pass totally incognito, you don't expect to see him there, so effective in wiping himself out "I walked, I took the bus, the subway, and I observed....For example I helped at hockey training for kids. I watched how each one carried themselves, the parents, the coach the children, and I asked myself how Nikolai would behave..." He is known for investing himself to the core in his roles, notably in the preparatory phase. "A maniac" exclaims Cronenberg. Himself: "For the audience to believe, I must also believe it. And then that allows me to come to the filming completely ready, open.........Equally, I am not one of those who struggles hard to shed their character". By way of evidence, Nikolai unloaded several kilos. It was necessary to have "A body at the time capable of combat, but who was real life". From his travels he carries the beads which his character rolls thoughtfully and "the air, the attitudes, a certain fatalistic humor". He also became a rare work in the Russian tattoos. In a moment reminiscing about a visit to Auschwitz concentration camp with his son, He suggested that his character could also be Jewish.....But to that, Cronenberg had responded, "That's great Viggo...." He recalls it with a self deprecating smile. On the set of The Lord of the Rings he was baptized "no-ego Viggo". And the gesture of Nikolai extinguishing his cigarette on his tongue? "Oh that....that's a thing that I do, and I thought it would work well". Viggo Mortensen is a light who doesn't raise his voice even with regard to "incompetent" directors. Who only leave the actor with the hope that "the film miraculously resembles something". This time he is filming under the direction of Ed Harris: Appaloosa is a western between two men and a woman; you can already imagine him a quiet lover but a dab hand on the trigger. After, he will become involved in the adaptation of The Road by Cormac McCarthy. An American phase all in all, given he willingly films in Spanish: he was born in New York, he grew up with his brothers in Venezuela and Argentina, in the footsteps of a father who is Danish and a farmer, and an American mother. When they divorced he returned to the States, theatre course in New York....he has since installed himself at Venice Beach, a cool arty area to the west of LA. But a notable opponent of Bush and the Iraq war who once wore a t-shirt saying "No more blood for oil" doesn't "Feel especially American" He comes into view a chameleon hobo "Argentinean when I am in Argentina, Danish when I am in Denmark, Spanish when I am in Spain". Also, as often as he can he hangs out with his 19 year old son, who he had with ex-wife Exene Cervenka, singer of the punk group X and artist. He publishes certain of his work through Perceval Press, his small publishing house, specializing in art - himself a painter, photographer, and poet - which provides a calm relationship. Since, he was said to be dating the daughter of painter Julian Schnabel. Then nothing. Alone? The idea doesn't only please us, but hang on: there is something of the samurai or fakir in this fan of the Passion of Joan of Arc by Dreyer.

Precisely: What does this man who carries the rosary beads believe in? "In mystery. You can always guess, there are always, in people and what they share, things which escape you." Message received. If Viggo Mortensen hasn't necessarily found his master, Cronenberg could have found his muse. And us, a hero.