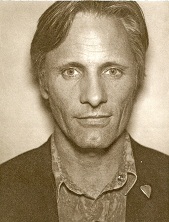 Image Benoit Peverelli.
© Libération.
Yes, this is a fixture. Three profiles of the actor Viggo Mortensen, in the space of three years, by the same person. This time it started as a bet between girls: a dare that I'd redo his profile, and moreover, to put it simply, from now on, every time or almost that he comes to Paris to do movie promotion, I will meet him and I will redo his profile again. Viggo full circle, Viggo forever, me, Viggo and I etc. Laughter from the group. But the idea takes hold: and what if this girlish obsession opens up the way to do an evolving and progressive version of his profile, instead of the more usual way, capturing the subject for one frozen moment, like an entomologist pinning a butterfly to a board? OK, doubtless it's just a means of ennobling and intellectualising a quite basic fantasy (to meet the abstract object of one's desire). But a philosophical colleague offered this lifeline: "At the end of the day it might construct a cubist profile, with each episode depicting a particular point of view." Be aware that conditions will hardly ever vary: three quarters of an hour in a hotel. The colleague added "Good luck". Fortunately there's Viggo.

He's a perfect model for a journalist learning cubism: he is so very calm, so much so that you can quietly observe him on all sides without giving the impression of being a voyeur. He says, slowly and langourously: "Yes, I'm nearly always tranquil, and it takes a lot to make me dig my heels in. In cases where there is disagreement I'm the one who is going to try to calm things down. But, if it is necessary to go there I do." In Appaloosa, the Western which has bought him back to Paris, he plays a kind of mercenary for hire, who dispatches the bad guys without hesitation. You don't want to understand? Bam bam, a wallop in the belly, adios. A psychopath, with a steely gaze. In fact, equanimity towards extreme violence features throughout his filmography, starting with the great roles (Vietnam veteran in The Indian Runner, King in the Lord of the Rings, fake father of a happy family in A History of Violence, real/fake henchman of the Russian mafia in Eastern Promises). And with Appaloosa we add a mystery to these (even though it's a Western). Mortensen is kitted out with a killer goatee, as if he needed to hide something, his handsomeness maybe. Thank God, no such thing on the day of this third meeting. Neither crinkly hair, nor a moustache like the previous times. Just him, tanned which emphasizes the crooked scar he has above his upper lip. He had gained a little weight; that suits him well.

Viggo Mortensen talks about the film directed by Ed Harris, saying it is "like autumn"; that one of the themes is of ending: of a friendship, a time (it is at the beginnings of industrialization), of a way of living. However, it's "always interesting to see how people react to change: some panic, others are more accepting, others still, seize their opportunities." He is faultless in its promotion, friend Mortensen. Always gracious and motivated even though his position seems assured since the Lord the Rings. He says: "It is my duty." Adding, with a hint of a smile: "When the film is not good, you talk about other things, football for example." His cup of mate, which follows him everywhere, bears a sticker of Atletico San Lorenzo de Almagro, A Buenos Airean football club. Football was not discussed. Usually he wears a lapel pin showing the United Nations logo ("because it's better than to be divided, no?") this time it's a brushed metal heart, "a prop for the film", filmed one year ago. He's known as an intellectual who ponders over the least of his roles like a maniac, here he is also sentimental, carting around these trinkets. At the end of May, a report by the New York Times on the filming of The Road, an adaptation of the novel by Cormac McCarthy, described our hero in beard and rags night and day, bound up in his character, a survivor of the apocalypse.

All of a sudden, this unexpected discussion: Does falling in love justify changing ones life - as the character played by Ed Harris in Appaloosa does. The divorced Viggo says yes, suggesting it must be so if one needs the constant presence of the other. "And you, what do you think? The question really interests me." Viggo M. is thus also open to enter into debate. In fact, it was the obvious moment to ask him, where are you at, emotionally speaking? In the hope that he will remain an inaccessible icon, safely installed on his pedestal, or wanting to do the right thing, this crucial question remains unasked.

Also unasked: why he does interviews in his socks. He would undoubtedly have answered, "it's more comfortable." He has an absolutely soothing, matter of fact side, the great guy who comes over as a wise old man, eyes half-closed, who answers in relation to horses or the piano: "I do what is in front of me, that's all." Ditto for poetry, painting, photography: "I go back and forth." Dilettantism? The Perceval Press site, the publishing house which he founded in 2002, demonstrates increasing productivity. It really seems that Mortensen possesses the innate fluidity, for his activities to nourish one another, just as he can alternate languages in the same sentence, this time English and French (he lived in Canada), but that could have been Spanish (he grew up in Argentina and in Venezuela), or Danish (his mother is American, his father Danish, he was born in New York), or Russian (he learned it for Promises). His photographs, as with his poems suggest a contemplative attention, Zen with a melancholic tendency, with echoes of animism, he says that Buddhism interests him, yes, "but I am in any event ready to believe in many things." He has just read a biography of Samuel Beckett: "Very interesting. I am in agreement with him when he says that life is impossible, but that it is necessary to continue; to the end, it is quite optimistic, what's more he continued to write until the end." He adds that "life is simple, it is people who complicate it."

Citizen Mortensen will obviously vote for Obama, Viggo is perfect. He specifies: "All that I hope for, is that the momentum that he has aroused will really carry Obama to change things. It makes me think of the hope created by Robert Kennedy in 1968." During an evening event organized a few months ago in Portland based on the work of Howard Zinn, celebrated historian of the American left (author of the best-seller A Popular History of the United States), the actor, in a T-shirt "Make art, not war" read a text by John Reed, journalist and Communist militant, which in particular, covered the Mexican and October revolutions.

A handshake, the promise of a book of photographs to be sent soon, and he lightly and smartly went on his own sweet way. The papers announced he is in Edgar Allan Poe; in a biopic project of Sylvester Stallone [sic], and as Lapérouse in Vanikoro by the Frenchman Xavier Gens [sic]; there is also the question of a new collaboration with Cronenberg. So long, Viggo.